In 1990, the U.S. government gave the green light to the Human Genome Project. This scientific research program set an ambitious goal of determining the sequence of chemical base pairs that comprise human DNA. Thirteen years and $3 billion later, the project was formally completed, giving rise to the genetic testing industry.

Ever since that monumental achievement was made, companies have been in a never-ending race to lower the cost of genetic testing and thereby make it available to everyone. For years, Illumina (NASDAQ:ILMN) has been a leader in that race, turning its stock into a market darling.

Here's a look at three charts that help to explain why Illumina's stock has been such a rocket-ship -- and why today's share price might represent a great opportunity to get in.

The key to Illumina's long-term success has been its ability to consistently lower the cost of genomic testing. A decade ago it cost more than $10 million to sequence a genome, but a series of innovative product launches has pushed that number to around $1,000 today. Those plunging costs have greatly increased the demand for Illumina's products, leading the company's revenue to skyrocket. 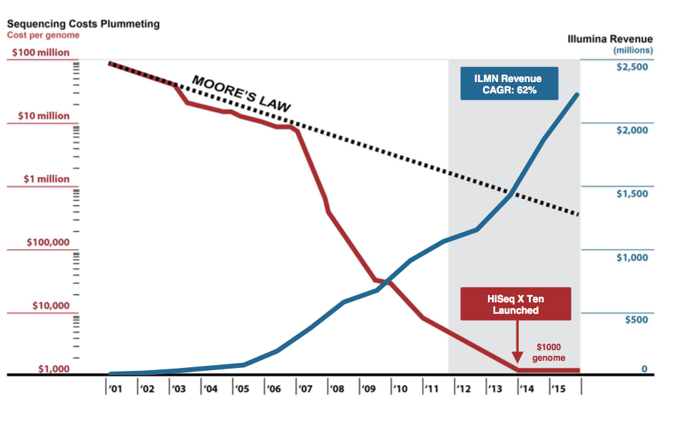 Despite that torrid growth rate, it remains highly likely that demand for genomic sequencing machines will only continue to grow. After all, costs continue to plunge, and we're finding new and better ways to utilize the data. Insurers are also finally starting to change their reimbursement policies to cover the costs of testing. That backdrop bodes well for the company's long-term growth prospects.

One reason investors have come to embrace Illumina's stock is its razor-and-blade business model. Operating one of Illumina's systems requires the use of consumable products to run the tests and specialized software to interpret the results, both of which create recurring revenue streams for the company.

Over time, revenue from consumable products has grown to exceed revenue from system sales. Last year, consumables comprised 58% of the company's total revenue, with services adding another 15%. Both of those categories are very high-margin, allowing Illumina to steadily increase its profitability. 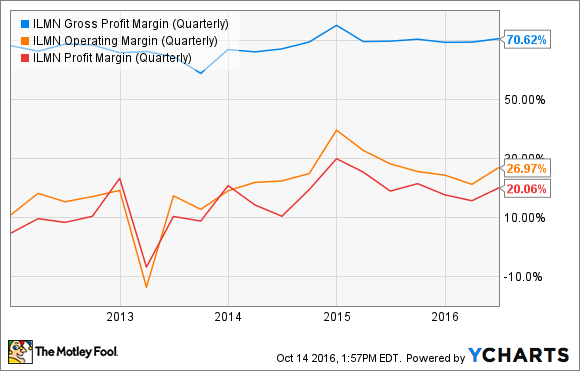 When you combine high revenue growth with expanding margins, wonderful things can happen to the bottom line. In 2011, Illumina's net income was only $86 million, but that number expanded by more than 530% over the next four years, eclipsing $461 million in 2015.

Given the company's high growth rates and attractive business model, it should come as no surprise to see that Illumina has attracted the attention of growth investors. In turn, the company's stock has long traded at a premium valuation. 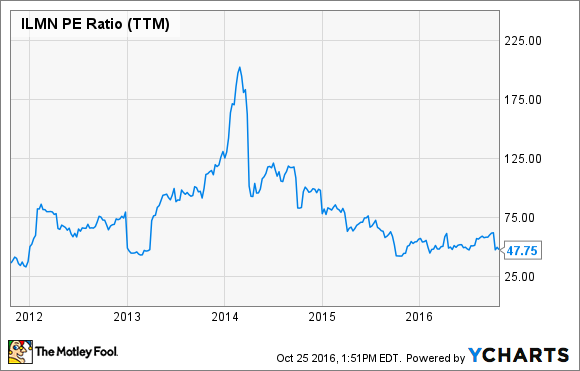 However, the company's stock recently got whacked after management announced that its growth is starting to slow. In the upcoming quarter, management stated that revenue will come in around $607 million, which is below management's prior outlook of $625 million to $630 million. Even more concerning was that CEO Francis deSouza stated that the company expects its fourth-quarter revenue to be "flat to slightly up sequentially."

Shares plunged more than 24% when the news hit the wire, pushing the company's P/E ratio down to levels that haven't been seen in years. The news of slowing growth should give investors pause, but if this proves to be a temporary hiccup in Illumina's long-term growth, then history suggests that shares are selling for a relative bargain today.

We don't yet have enough information to know whether this is a temporary slowdown or the start of a troubling trend. After all, it could be possible that Illumina is losing its competitive edge. Pacific Biosciences of California (NASDAQ:PACB), which has long played second fiddle to Illumina, is seeing a lot of success with its newly launched Sequel system. The company said it has already received more than 100 orders for the machines, and it also boasts a distribution relationship with Roche. That's a real competitive threat that investors need to keep a close eye on.

Still, the market opportunity for genomic testing could prove to be so large that there could be multiple winners, so the amped-up competition might not be enough of a reason to sell shares just yet. Given the company's long history of success and durable business model, I'd argue that this recent fall is a buying opportunity instead of a reason to head for the exits. If you agree and have a strong stomach for volatility, then picking up a few shares while they're down might prove to be a profit-friendly decision.