In 2015, microprocessor giant Intel (NASDAQ:INTC) talked up a new type of memory technology that it had developed jointly with memory specialist Micron, known as 3D XPoint. In a nutshell, 3D XPoint is pitched as a memory technology that's supposed to sit in between traditional DRAM and NAND flash in terms of speed, endurance, and cost. 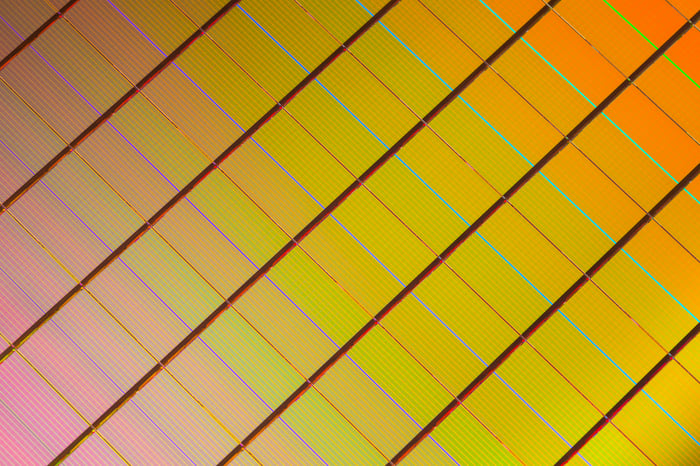 Although it's not quite clear how large the market opportunity for this technology is, investors are likely to begin to find out next year as the company begins production shipments of the technology.

According to Intel CEO Brian Krzanich on the company's most recent earnings call, the company plans to "ship thousands of [3D XPoint] samples to customers" as the current quarter progresses. He also said Intel is aiming to qualify 3D XPoint for production "at the end of the quarter."

Once the technology is qualified for production, the company aims to ramp up production of 3D XPoint throughout 2017, which is when investors should expect to see revenue from the product flowing into the company's top and bottom lines.

During the call, Krzanich made clear that Intel's upcoming Purley server platform won't feature support for 3D XPoint memory modules (in other words, substitutes for traditional DRAM) at the outset -- that support is now expected to come with the company's second-generation processor family on the Purley platform.

The earliest that investors should expect such memory modules is sometime in 2018.

It's important to understand, however, that this doesn't mean Intel won't be selling 3D XPoint into the server market throughout 2017. It simply means that the first server-bound 3D XPoint products will be storage drives just like today's NAND-flash-based solid-state drives, just way faster.

If 3D XPoint delivers what Intel claims it delivers, then there could be a significant revenue opportunity just from storage drives based on the technology. However, what Intel seems to be more excited about is the prospect of selling memory modules based on this technology to stand in for traditional DRAM.

Memory modules are a whole different ballgame, however.

Every 3D XPoint memory module that Intel sells would presumably be in place of a traditional DRAM-based memory module. Today, Intel doesn't manufacture or sell DRAM products, so to the extent that 3D XPoint can be substituted in for DRAM, Intel stands to enjoy revenue upside. 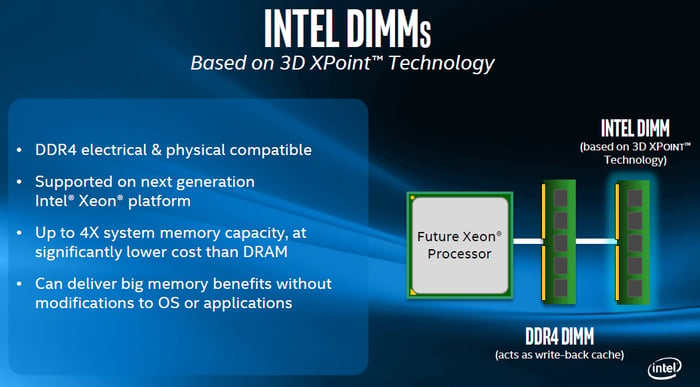 It goes beyond near-term revenue, though. Intel currently commands nearly the entirety of the server processor market, and it would obviously like to keep as much of that share as possible, even as many chip competitors try to rip away market share.

Should these 3D XPoint memory modules prove to offer a real and compelling value proposition to data-center operators, and should those memory modules work only with Intel's processors, they could be instrumental to helping Intel maintain extremely high server processor market share.

Considering how much Intel has riding on its ability to maintain a strong position in the server market, it's little surprise that the company would be interested in developing compelling complementary platform technologies that only work with its platforms.