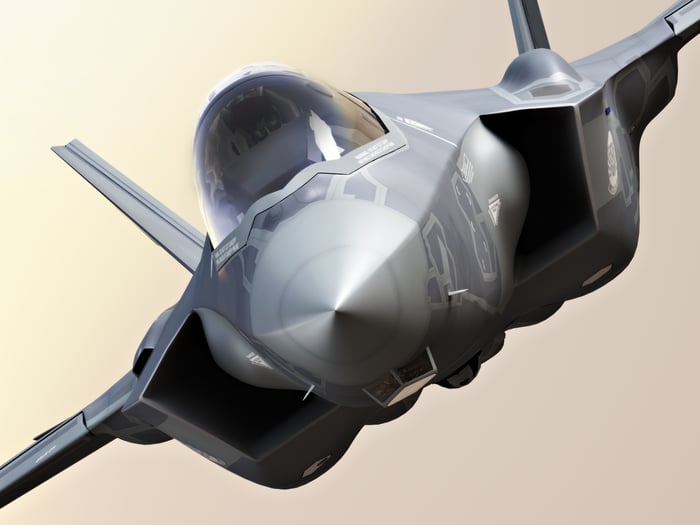 Lockheed Martin's F-35 fighter could be a huge win -- or it could blow up the company's cash flow statement. Image source: Getty Images.

Investors were hoping for a strong quarter at Lockheed Martin (NYSE:LMT) Tuesday. They were not disappointed.

Reporting its financial results for the fiscal third quarter 2016, a quarter in which Lockheed Martin successfully unloaded its IS&GS division and shifted its focus to military hardware, the company reported "strong operational and financial results," including:

Clearly, those were some blockbuster results (and investors greeted them with acclaim, bidding Lockheed Martin stock up more than 7% in response). But Lockheed didn't just have good news about what it did last quarter, but good news, too, for what it expects to do the rest of this year.

Announcing revised guidance "adjusted for IS&GS," Lockheed now expects to report $46.5 billion in sales this fiscal year, and earn $5.5 billion in operating profit thereon. If that's how things work out, it will give the company an 11.8% operating profit margin for the year, reversing the dip in profit margins that the company saw in 2015, and leveling off at historically high levels. Profits per diluted share are also likely to come in at $12.10 this year, nearly one full dollar above the low end of previous expectations.

So much for the headline numbers. What investors really want to know about Lockheed Martin, though, is how things are progressing in the company's all-important F-35 fighter jet program, which currently accounts for 20% of Lockheed Martin's revenue stream, and could rise to account for 50% of revenue in future years. But here's where things get tricky.

Guiding investors on the subject of cash flows, Lockheed Martin made a curious observation. If the company collects cash advances in payment for the next two lots of F-35 fighter jets on order from the Pentagon in 2016, then the company could book cash from operations of $5.7 billion this year -- $200 million more than its reported operating profit, and more money than Lockheed expected to collect as recently as July. On the other hand, if Lockheed's cash collections are delayed into 2017, the company warns that its cash from operations could come in as low as $5 billion -- below reported profit, and below previous expectations as well.

So what's that all about?

"Are we negotiating?" "Always!"

Lockheed warned that "cash from operations is likely to be impacted by a delay in collections on the F-35 program," as the company "continues to negotiate" both the price and the timing of two new "lots" of fighter jets on order from the Pentagon (estimated total cost: $14 billion). According to The Wall Street Journal, the Pentagon is upset that Lockheed has been unable to lower the per-unit cost of the F-35 down to its targeted level of $80 million, and is threatening to split up its negotiations on price of the two lots, paying for some this year, and more next year.

Such an event has the potential to limit Lockheed's cash produced from operations this year -- and make its valuation look rather ugly, as well.

Consider: Boosted by profits from the big IS&GS sale, Lockheed now boasts $5.2 billion in trailing profit, and a $75.5 billion market capitalization. That gives the stock a price-to-earnings ratio of just 14.5. Valued on free cash flow (cash from operations minus $1 billion in capital expenditures) however, the stock already costs a pricier 15.7 times FCF (based on data from S&P Global Market Intelligence).

Now, what happens to that valuation when we consider the cash payments tied to the F-35 program? Best case, if Lockheed Martin gets all the cash it's hoping for this year, free cash flow should be in the neighborhood of $4.7 billion, holding the stock's price-to-free-cash-flow ratio more or less steady at 16.1. On the other hand, if Lockheed brings in only $5 billion in cash from operations, and then minus capital expenditures produces only $4 billion in free cash flow, then the stock's valuation rockets up to nearly 18.9 times FCF -- which could look pretty pricey on a stock expected to grow profits at only 10% annually over the next five years.