Shares of discount airline pioneer Southwest Airlines (NYSE:LUV) cratered as much as 12% on Wednesday, following the company's Q3 earnings release. As of 1:15 p.m. EDT, Southwest Airlines stock had cut its losses, but was still down by about 7%, wiping out most of its gains from the previous month. 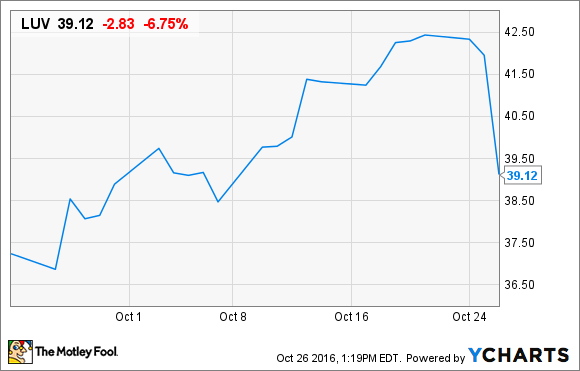 The company's Q4 outlook for revenue and costs was certainly disappointing. Southwest's competitors -- spanning the spectrum from business-focused airlines like Delta Air Lines (NYSE:DAL) to leisure-focused budget carriers like Spirit Airlines (NYSE:SAVE) -- are projecting that unit revenue will start to recover next quarter. By contrast, Southwest Airlines doesn't expect any improvement.

However, Southwest's guidance looks worse than it really is. While the company faces some severe near-term profit headwinds, it should be able to return to solid earnings growth in the second half of 2017.

A few months ago, Southwest was near the top of the airline industry in terms of unit-revenue performance. In Q2, it posted a record profit, thanks to a 0.6% increase in revenue per available seat mile (RASM), whereas RASM declined at nearly every other airline. Part of Southwest's outperformance was driven by higher revenue from its new credit card agreement, but it would have posted solid results even without that lever.

However, in Q3, Southwest Airlines fell back toward the pack. RASM declined 4.1% year over year as the tailwind from its new credit card deal faded, while the company's July technology outage disrupted bookings.

Still, this was better than some of Southwest's competitors. Delta Air Lines also had a major IT outage during the quarter, and its passenger revenue per available seat mile declined 6.8% year over year. Meanwhile, Spirit Airlines -- which had posted a string of double-digit RASM declines dating back more than a year -- reported a 7% decrease in RASM for Q3.

The revenue outlook is weak

The real disappointment was that Southwest doesn't expect any improvement in unit revenue this quarter. In fact, its forecast that RASM will fall by 4%-5% implies that the revenue environment actually looks somewhat worse for Q4 than it was last quarter.

This stands in stark contrast to most other airlines' revenue outlooks. Delta expects passenger unit revenue to decline 3%-5% this quarter. Meanwhile, Spirit has forecast that RASM will fall 3%-4.5%. In other words, Delta and Spirit are both projecting slightly better unit revenue results than Southwest, reversing the recent trend.

Costs are rising, too

Adding to the pinch on earnings, cost creep is setting in. Southwest expects its non-fuel cost per available seat mile (CASM) to increase by 4%-5% in Q4, up from a 2.6% increase in Q3. The company's economic fuel cost will also be up slightly on a year-over-year basis.

The uptick in Southwest's unit costs can be attributed to new labor contracts that Southwest has agreed to in the past month or two. Most notably, pilots are set to receive an immediate 15% pay increase, followed by 3% annual raises for the next four years.

Q4 profitability will sink -- but the 2017 outlook is better

Based on its forecast for rising fuel and non-fuel costs and falling unit revenue, Southwest could face 7-8 percentage points of margin contraction this quarter relative to last year's Q4 operating margin of 19.9%. That will likely cause EPS to decline by at least 25% year over year.

However, fuel-hedging losses represent a nearly 5 percentage point margin headwind for Southwest in Q4. That should decline to 2 percentage points or less throughout 2017.

Additionally, Southwest's decision to retire the last of its previous-generation 737s by next September continues to impact its non-fuel unit costs by about 1%. That additional expense will come off the books a year from now. Additionally, replacing those planes with brand new 737s will drive fuel efficiency and productivity higher while reducing maintenance costs.

Lastly, Southwest is set to reduce its growth rate again in 2017, particularly in the domestic market. Slower growth should help it return to steady unit revenue growth along with the rest of the industry. There may be some bumps, but by this time next year, Southwest will probably be back to delivering strong earnings growth.