Shares of food delivery company GrubHub (NYSE:GRUB) tumbled on Wednesday following the release of the company's third-quarter report. While GrubHub managed to beat analyst estimates for both revenue and earnings, investors weren't impressed. The stock was down as much as 10% Wednesday morning, settling into an 8% loss by 11 a.m. EDT.

Non-GAAP EPS came in at $0.23, up from $0.13 during the prior-year period and $0.04 better than analysts were expecting. On a GAAP basis, GrubHub produced $0.15 of EPS, up from $0.08 during the third quarter of 2015. Total GAAP expenses increased by 38.8% year over year, slightly slower than revenue, allowing earnings to expand at a faster rate.

Despite generally positive results, investors pushed the stock down on Wednesday. GrubHub has taken investors on a roller-coaster ride since the company went public, first collapsing and then almost fully recovering, and the drop on Wednesday could indicate that the stock has gotten ahead of its fundamentals. Year-to-date, GrubHub stock is up 63%, even after the post-earnings decline. 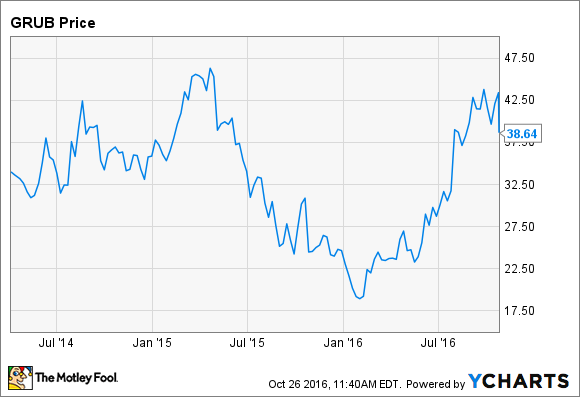 GrubHub continues to grow at an impressive rate, and the company is profitable, unlike many other fast-growing upstarts. But with a market capitalization of roughly $3.4 billion, GrubHub is valued at 46 times analyst estimates for full-year non-GAAP earnings. Rapid revenue growth and margin improvement need to continue for many years for this valuation to be justified.

It's hard to say exactly what triggered the sell-off on Wednesday, but the 19% growth in active diners is a likely culprit. The food delivery business is ultra-competitive, and investors may be concerned about GrubHub's ability to expand its customer base.