Diversified precious metal producer Coeur Mining (NYSE:CDE) published its third-quarter results after the market closed on Wednesday. It was an excellent report, with the company delivering adjusted earnings of $38.6 million, or $0.23 per share, which handily beat analysts' earnings expectations thanks to rising silver prices. That said, as exciting as its earnings beat was, the most impressive numbers were the improvements in free cash flow, the balance sheet, and its full-year cost guidance.

Coeur Mining reported that cash flow from operating activities rose 4% to $47.8 million. However, after accounting for investment spending, the company generated $14.6 million in free cash flow, which was up 20% from last quarter. What's impressive about that number is the fact that last quarter the company increased its second-half exploration budget by $8 million and its capex budget by $10 million, meaning it still had plenty left over even after increasing investment spending.

Three factors drove cash flow growth. First, the company benefited from higher realized gold and silver prices during the quarter, which were up 5% and 13%, respectively, from the second quarter. Second, in July the company met the minimum ounce requirement on a Franco-Nevada (TSX:FNV) royalty agreement at its Palmarejo mine. That resulted in a significant increase in that mine's free cash flow after it triggered a shift to a new stream agreement with Franco-Nevada at more favorable terms. Third, its interest expenses fell 26% from last quarter and are down 35% over the past year.

Driving the decline in interest expense is the fact that Coeur Mining paid off $109.2 million in debt during the quarter. The company was able to do so because it is generating free cash flow, has a high cash balance, and brought in more money via an at-the-market stock offering. So far, the company raised $90 million in that ATM offering, and it still can issue another $110 million in stock, which would give it even more cash for debt reduction.

As a result of the debt reduction during the quarter and its rising earnings, Coeur has reduced its total debt-to-LTM adjusted EBITDA to 2.0 times. Further, when adding in its $222.5 million cash balance, that metric falls to just 0.9 times. That is a tremendous amount of progress over the past year: 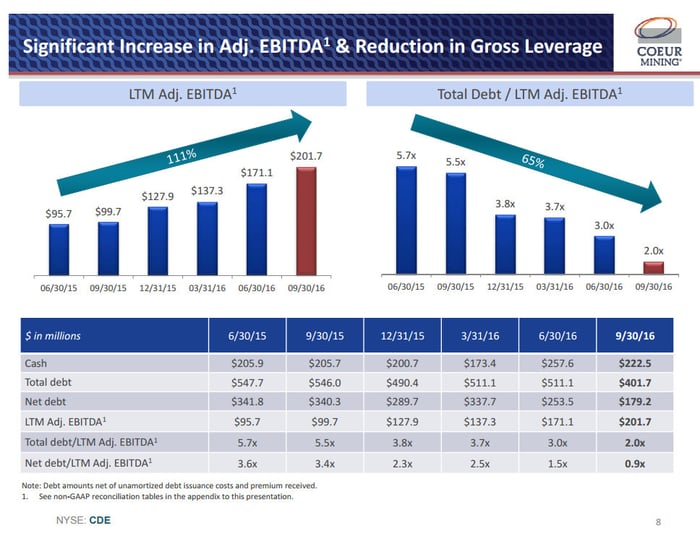 Another factor driving Coeur's rising earnings is its falling costs. Since the end of 2013 and through the second quarter, the company's all-in sustaining costs (AISC) per realized ounce of silver equivalent is down 35%. That is industry-leading performance and much better than its peers. For example, Silver Standard Resources' (NASDAQ: SSRI) costs are down 22% over that same time frame while Hecla Mining's (NYSE:HL) costs are down 19% for gold and 14% for silver. While Coeur's costs did rise during the third quarter, the company sees its costs remaining under guidance for the full-year.

That allowed the company to reduce its full-year AISC guidance to $14.25 to $14.75, down from its original guidance of $16 to $17.25. These lower costs are coming right after the company increased its guidance for production earlier this month, with it expecting full-year silver equivalent production between 34.4 million to 37 million ounces, up from 33.8 million to 36.8 million ounces. This combination of expectation-beating production and costs should lead to strong financial performance for the year, as long as precious metal prices do not take a nose dive this quarter.

Coeur Mining is cashing in on higher precious metal prices right now. That is evident from the fact that its cash flow is going up while its debt is coming down. Meanwhile, the company continues to strengthen its ability to profit should prices come down by boosting output and reducing costs.