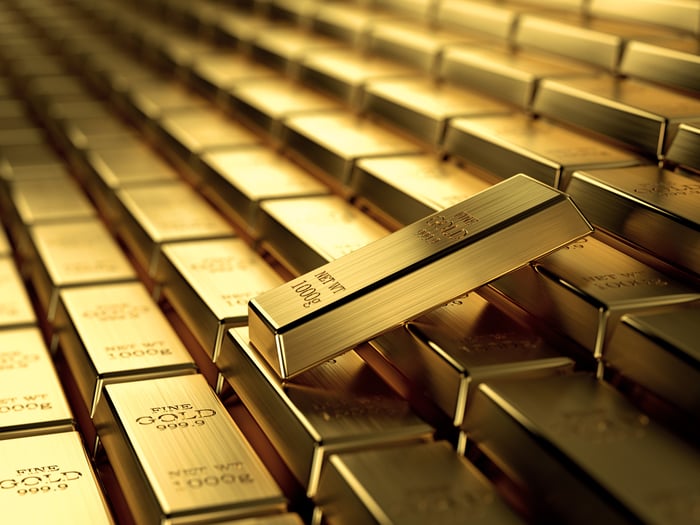 Barrick Gold's (NYSE:GOLD) investors wanted three critical questions answered when it released third-quarter earnings. They wanted to know if it extended its streak of generating free cash flow, if it was still on pace to hit its debt reduction target, and if the temporary shutdown of one of its mines would impact full-year production guidance. Investors got their answers when the company released that report after markets closed on Wednesday and given the positive responses it had for them, the miner undoubtedly eased their concerns.

Cashing in on rising gold prices

Heading into the third-quarter Barrick Gold had generated free cash flow in each of the prior five quarters. Given that gold prices were at their peak during the third quarter, investors were expecting that the company would keep that streak alive. It did not disappoint, reporting $951 million in net cash from operating activities and a remarkable $674 million in free cash flow. That is up from $274 million just last quarter.

Driving that free cash flow was its ability to keep all-in sustaining costs down to $704 per ounce of gold, thanks to a focus on productivity, efficiency, cost management, and capital discipline. Meanwhile, production was solid at 1.38 million ounces. While that was down from 1.66 million ounces in the year-ago period, that was partially due to asset sales, including the sale of its non-core assets in Nevada to Kinross Gold (NYSE:KGC) earlier this year.

The $610 million Kinross Gold asset sale enabled Barrick Gold to exceed its 2015 target to reduce debt by $3 billion. For 2016, the company wanted to reduce debt by another $2 billion and was roughly halfway to its goal at the end of the second-quarter. It moved even closer to hitting that target in the third quarter, reducing debt by another $461 million, which brings its total reduction this year to $1.4 billion, or 70% of its goal.

With $2.6 billion in cash and the expectation for continued free cash flow generation, the company has a clear line of sight to achieve its $2 billion debt reduction target without any additional asset sales. That likely means it is in no hurry to sell its interest in the KCGM joint venture in Australia that it co-owns with Newmont Mining (NYSE:NEM). That said, the company continues to aim for getting its total debt below $5 billion. Given that it currently stands at $8.5 billion, the company still has more work to do, suggesting that a sale of the Newmont Mining venture is not out of the question.

One of the concerns heading into the quarter was what impact the temporary shutdown of its Veladero Mine could have on production guidance for the full year. That is after the company said that it was still assessing "the impact of the temporary suspension of Veladero's production for 2016." The company now believes that the suspension, as well as adverse weather conditions, will cause production at that mine to be 530,000 to 580,000 ounces of gold, which is down from its prior range of 580,000 to 640,000 ounces.

Barrick Gold's third-quarter report certainly answered any question about its ability to cash in on gold prices during the quarter. The company did just that, generating substantial free cash flow, which it used to repay debt. Further, it completely erased concerns that the issues at Veladero would negatively impact full-year guidance, with the stronger output from other mines more than offsetting weaker production from that mine. These results put the company in a strong position to finish the year.