MGM Resorts International (NYSE:MGM) has been making a lot of headlines in the last few years for the growth and development initiatives it's taken on, including new casinos in the U.S. and Macau, a new arena and expanded convention space in Las Vegas, and more. While confidence in these developments has been responsible for much of MGM's share price gain in the last few quarters, the price tag of these investments has saddled MGM with a massive debt obligation, more than competitors such as Wynn Resorts (NASDAQ:WYNN) and Las Vegas Sands (NYSE:LVS). 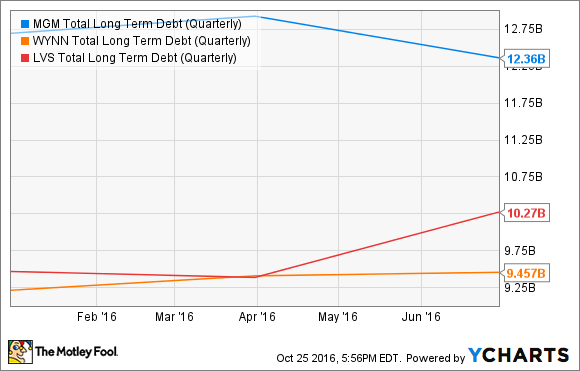 Still, MGM does have a lot to show for its expenditures, and its debt could actually be moving in the right direction as the company seems to be taking important steps to get back in shape. In a recent release, MGM CFO Dan D'Arrigo said:

The continued strong support from the investment community is a true testament to the significant progress we have made in improving our balance sheet. We remain dedicated to continuing to improve the balance sheet and returning MGM Resorts to investment grade.

What MGM has to show for its investments

Las Vegas has been MGM's most important region in the last few years, with hotel and convention space revenue leading the way. MGM currently dominates the Las Vegas Strip, with more properties than any of its competitors, and controls around 50% of all hotel rooms there. MGM has been investing in growing its non-gaming revenue in Las Vegas, including the recently opened T-Mobile Arena, which seats 20,000 people and showcases everything from concerts to national sporting events. Additionally, MGM has made massive upgrades to its convention spaces, adding or upgrading hundreds of thousands of square feet at its properties in recent years.

Outside of Las Vegas, MGM hopes the U.S. East Coast will provide a good return on investment. MGM will be opening the $1.3 billion MGM National Harbor casino and hotel outside of Washington, D.C., in Prince George's County, Maryland, on Dec. 8. Fitch Ratings believes MGM National Harbor could give MGM a $240 million EBITDA boost in 2017. Next to open in this region will be MGM's casino in Massachusetts, expected to open in 2018.

Finally, MGM will be opening a new resort on Macau's Cotai Strip sometime in 2017 that will feature 1,600 rooms and many other exciting developments. Even though Macau has been a source of pain in recent years, industry followers believe year-over-year gaming growth will likely turn positive in 2017. MGM is the last of its major competitors to open a new casino on the Cotai Strip, but it will still have a lot to gain since Macau currently makes up a relatively small part of its total revenue.

As of the most recent quarter, MGM had around $12.4 billion in total debt. MGM's debt to equity, a measure of financial risk that divides total liabilities by total shareholder equity, is 2.2. While companies in this sector often have higher debt levels because of the nature of their capital-intensive business, MGM's debt to equity is substantially higher than that of competitor Las Vegas Sands at 1.6.

However, one important metric investors should be paying attention to is MGM's current ratio, or the company's ability to use current assets (such as cash) for current debt obligations. Usually, 1.5 is a safe current ratio, and below 1 becomes a red flag. MGM has made real progress here by moving that ratio up to 1.7, which is actually good considering MGM doesn't pay a dividend. 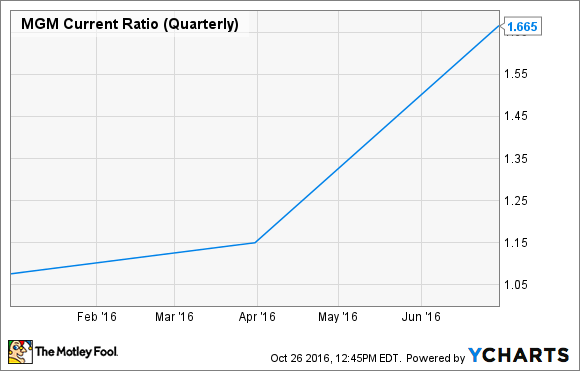 In August, MGM announced that it had closed financing for another $500 million in senior notes, but instead of this adding to the company's debt load, it instead used that loan along with some of its cash to pay off a large chunk of debt that would otherwise come due in 2017. The paid-off debt had an interest rate of 7.6%, where as the new $500 million loan carries an interest rate of just 4.6%, the lowest interest rate on long-term debt in the company's history, which should reduce interest payments and increase its current ratio going forward.

The big risk with MGM is that it will follow the same path as Caesars Entertainment (NASDAQ:CZR), which was the former industry debt leader and has since faced possible bankruptcy because of its inability to get out from under its crushing debt burden. MGM now takes the lead as the most indebted company in its industry.

MGM certainly has a much more solid cash position than Caesars did before it started trying to restructure to avoid bankruptcy, as well as a much better diversified portfolio of worldwide operations, but its debt load is definitely a major risk if some of MGM's bets don't pay off as expected. Still, MGM's developments across the U.S. and in Macau look promising, and the company seems to be taking the right steps now to put its balance sheet in a healthy position once again.

During a recent investor day in June, MGM announced a new forecast of total 2017 year-end adjusted EBITDA (earnings before interest, tax, depreciation, and amortization) of $3.1 billion, up about 40% from the $2.2 billion logged in 2015. If MGM's casinos in Maryland and Macau have strong openings, and MGM can make good on this EBITDA goal, it will likely be able to grow earnings while also reducing that long-term debt further, which could make the stock a good bet.