There's been a lot written about whether GoPro Inc's (NASDAQ:GPRO) new Hero 5 line of cameras and Karma drone will be enough to inspire customers to buy new products this holiday season. Hero 5 is now facing competition from Garmin, Sony, and others in the action camera space, and the Karma drone was overshadowed by Mavic Pro when it was released.

While there are pluses and minuses of each of GoPro's products in cameras and drones, at worst, the company has a product that will garner the attention of consumers looking to buy products in these markets. GoPro's success will ride more on getting its inventory strategy right than on sheer volume of sales.

How inventory becomes a big problem

GoPro's struggles in 2015 can partly be blamed on inventory problems. Yes, the crowded camera lineup -- which has fallen from six to three -- didn't help, and last year's models weren't very compelling compared to previous models. However, if GoPro had made as many cameras as the market wanted, it still would have made money.

Instead, GoPro made a lot more cameras than the market wanted. That resulted in a $21-million impact to revenue from price reductions, and $40 million from price protection charges for the Hero 4 Session camera in Q4 2015. And the company took a $57 million hit to write down excess purchase order commitments, excess inventory, and obsolete tooling.

On top of the writedowns of its own inventory, GoPro had stuffed the retail channel so full that it spent the first half of 2016 waiting for retailers to sell through what they had already bought. The graphic below shows this dynamic. Notice the first half of 2016 shipments dropping 51% from a year earlier, to 1.5 million units.

Another way to look at this is GoPro's inventory to revenue. GoPro should be on a tick-tock schedule building inventory in Q3 in anticipation of a surge in sales in Q4 each year. But last year, inventory built up for a surge in sales that never arrived, resulting in excess inventory that took three quarters to burn off the balance sheet. 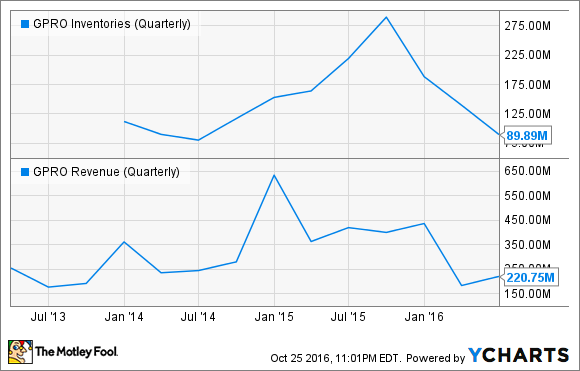 If GoPro gets its build levels wrong in 2016, it'll face the same problem. And this year, it's flying blind into the drone market.

Inventory is GoPro's biggest risk in 2016

The inventory risk may be bigger than last year, as well. On the Hero 5 camera side, it has a decent idea how many cameras customers will demand by the end of the year. It has a history with the product, and has shipped 3.5 million cameras in the second half of 2014 and 3.6 million in the second half of 2015. It's safe to say that a number somewhere in that range will be shipped this year.

But the Karma drone has no historical basis for GoPro to draw from. Will 10,000 units be sold this holiday season, or 1 million? Get that question wrong, and you have tens of millions of dollars in unsold inventory on the balance sheet and in retail channels, just like last year.

After last year's inventory fiasco, GoPro is probably leaning toward building too little inventory in 2016 rather than too much -- and for good reason. Each time a product goes into inventory, there's cash going out the door. And if that isn't matched by cash coming in the door in the form of revenue, a company can burn through cash quickly.

If GoPro can turn inventory over quickly this holiday season, it would restore confidence that management has a better understanding of its business than a year ago. But the drone makes that a tough task, whether it's a hit with consumers, or not.