This quick aside in Nike's earnings call hasn't gotten much attention -- but it will in the years to come, when it becomes one of the most important initiatives the company has taken on in years. 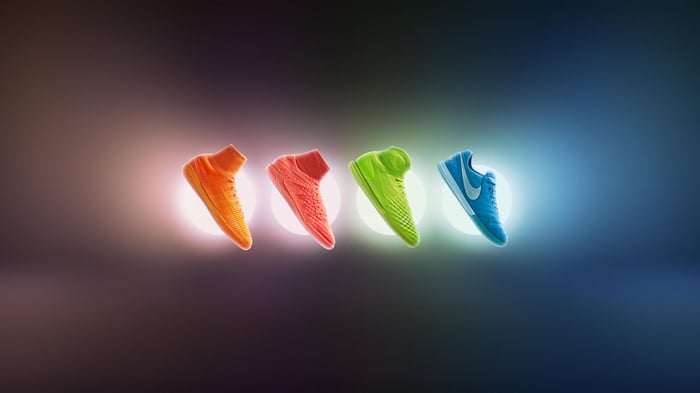 Nike (NKE 0.37%) management briefly touched on something in the company's most recent earnings call that hasn't had much attention, even though it could completely change how Nike operates in the years to come. "ManRev" is what Nike CEO Mark Parker called it, which stands for manufacturing revolution, and even though the company has been hinting at this for a few years, it seems to be driving this initiative much more seriously now.

Here's how Nike might be using 3D printing and other technology to shape the future of its manufacturing, and why it could lead to huge future gains.

The future of Nike's manufacturing

"Through our acceleration of ManRev," Parker said during the recent earnings call, "we're currently seeing the benefit to product cost optimization." Additionally, Parker stated that this new manufacturing model could increase speed to market and increase design and customization possibilities.

Nike gave very little insight into what exactly the "ManRev" innovations are, but you can look back at some of the innovation we've seen from Nike in the past few years to get a pretty good idea of how these trends will translate to modern day manufacturing. The biggest one is 3D printing. Nike was at the forefront of 3D printing footwear when it announced the Nike Vapor Laser Talon football cleat in 2013. This revolutionary shoe was one of the first performance shoes to use 3D printing in both testing and manufacturing, and Nike said at the time that 3D printing could be the future of footwear. More recently, Nike showed how similar technology could be used in building its Flyknit style shoes at scale.

Other than 3D printing, we are likely to see robotics and advanced automation at play in this new manufacturing model, so that the amount of physical human touch during product creation is limited, as is wasted material. We also know that Nike has a center on its Beaverton, Ore., campus it calls the Advanced Product Creation Center, where it looks at "disruptive methods of make" to drive new ideas further.

The industry is still playing catch-up

Nike certainly isn't the only one working on this overhaul of manufacturing. Under Armour (UAA -0.84%) (UA -1.55%) revealed what it calls "Lighthouse" in June. This 35,000-square-foot center is a hub for designers and engineers to test out innovative manufacturing ideas. Included in the space are 3D printers of various sizes, robotic and automated assembly machines, and even body scanners to design clothes to specific fit.

Under Armour CEO Kevin Plank said at the time that this industry is woefully behind the times, and that it needs to catch up to how much the world has modernized in its manufacturing capabilities. "In our industry, in apparel and footwear, we make a shirt and shoe the exact same way we did 100 years ago," Plank said. "We find that to be insulting, and we challenge other companies in our industry that call themselves innovative." He noted that the current manufacturing process sometimes takes more than 140 people touching a single shoe to get it to market.

Adidas (ADDYY -0.85%) has also shown its willingness to invest in updating its manufacturing capabilities. It announced recently plans to open a similar high-tech hub in Rhode Island, and more automated manufacturing plants in Georgia and Germany. Adidas-owned Reebok also recently launched a limited run of its "Liquid Speed" shoe, which uses a liquid-based manufacturing model, along with 3D printing, to create the unique shoe.

We still have very limited information about what exactly will be involved with Nike's ManRev project, but Parker did say during the call that right now is an inflection point where the company is going from testing -- to implementation across its many points of manufacturing. This could be big for three reasons: 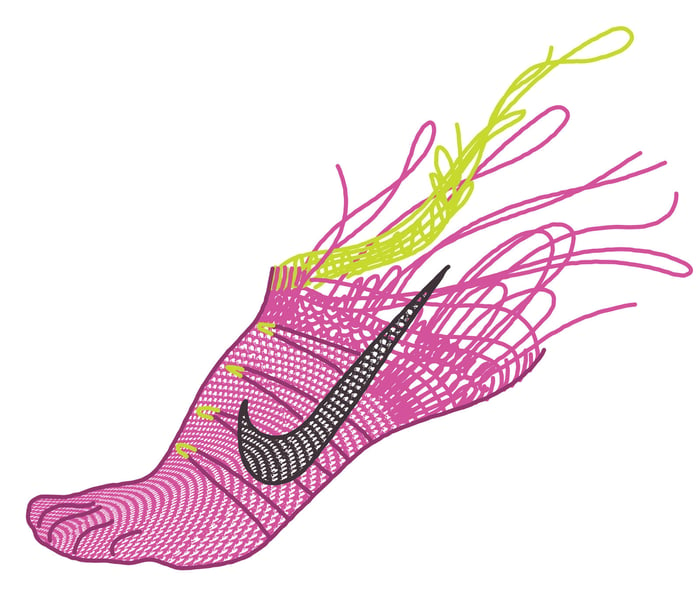 Materials and manufacturing are the biggest costs associated with Nike's product sales, so innovating there is the lowest-hanging fruit for Nike to really drive better margins. Nike management has said that this manufacturing revolution will drive down these costs with more automation and less waste. According to CFO Andy Campion, ManRev specifically is already having an impact. While he noted that expenses related to the investment of building out these new modernizations are not cheap, he also said that "we continue to benefit from higher full-price average selling prices; lower oil-based input costs; and the favorable impacts on product cost, driven by our Manufacturing Revolution initiatives." Nike's gross margin has suffered in recent quarters, driving down its overall profitability, but management believes that 2017 full fiscal-year gross margin will be up 30-50 basis points, year over year.

When items are produced overseas and then shipped to their country of sale, there are tax implications for that imported product. Assuming Nike can use this innovation to really build manufacturing hubs worldwide, it could help lower its tax bill. It may also be able to create local jobs with local manufacturing once again, which could even help the company to negotiate tax breaks in certain countries.

Nike has used 3D printing and other manufacturing innovations to make product testing much faster, going from weeks or months before an idea could be tested to just days or hours. It could also allow new, innovative ideas to get to market sooner. Under current manufacturing capabilities, products can sometimes be created and shipped months before they're expected to be sold. However, moving the manufacturing hubs closer to each region of sale could mean that new developments reach consumers much faster.