Video game giant Activision Blizzard, Inc. (NASDAQ:ATVI) reports earnings after the market closes on Thursday, Nov. 3, and investors will get another peek into how the business is growing after the acquisition of King Digital.

As you can see below, Activision Blizzard's stock has been on a tear lately and is near an all-time high: 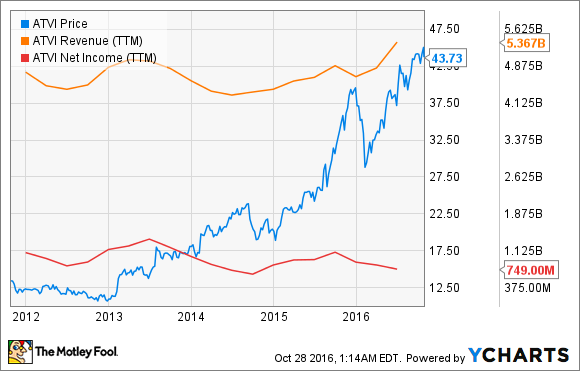 Here's what to look for in the earnings report to keep the momentum going.

The first thing to measure results against is Activision Blizzard's own guidance. Below I've outlined the key metrics from the company's financial outlook during the second quarter 2016 earnings presentation.

This table only shows the non-GAAP numbers, which are usually what Wall Street compares against and adjusts for deferred revenue in some games. GAAP revenue expectations are the same, but third-quarter and full-year EPS are expected to be $0.06 and $0.87, respectively. And while the quarterly numbers are important, so are trends in key gaming segments.

What to watch for this quarter

There are a few key metrics that Activision discloses each quarter, and investors will want to watch for improvement in the underlying business.

The first is monthly active users, which last quarter was 49 million at Activision, 33 million at Blizzard, and 409 million at King Digital. User growth has been tremendous for each business lately, and if all three are trending higher, it would be great news for the business.

Another key metric is engagement. Activision has the ability to reach a lot of gamers, but if they aren't engaged, they'll be less likely to spend money on recurring-revenue items that are now built into a lot of games. In the second quarter, nearly 10 billion hours were spent playing the company's games, including 500 million hours in Overwatch. And while King Digital doesn't break out complete user stats, look for positive trends like rising time spent per monthly active users.

The final key is e-sports. E-sports is a relatively new concept in gaming, but it's really key for Activision Blizzard going forward. The company bought Major League Gaming earlier this year and it recently held the Call of Duty World League Championship, handing out $2 million in prizes overall. Look for management to give updates on e-sports engagement, including likely exceeding Stage 1's 33 million views. If e-sports can become a stable business for Activision Blizzard, it will drive monthly active users, engagement, and revenue higher, so this is a segment investors shouldn't overlook, even if they've never watched gaming as a sport before.

Building on a gaming giant

The chart above shows that Activision Blizzard has been a big winner for investors over the past few years, and the company is still in early stages of unlocking its value. Gaming companies are just starting to figure out how to monetize the digital game business. Advertising will become a growing component of revenue, and e-sports are still in their infancy. With some of the best content in the industry, Activision Blizzard is well positioned to grow its top and bottom lines consistently for years into the future. A strong quarter would be a sign that the strategy continues to pay off.