As the solar industry grows and reaches a more sustainable place in the energy sector, some large manufacturers are starting to separate themselves from the pack. Two of the biggest are Canadian Solar (NASDAQ:CSIQ) and First Solar (NASDAQ:FSLR), which both produce solar panels and build large solar power systems. The question is: Which one is the better solar stock to buy today?

The biggest difference between the two companies is their technology. Canadian Solar makes silicon solar panels that are very similar to those of dozens of other manufacturers, making product differentiation difficult. It's essentially operating in a commodity pricing environment. 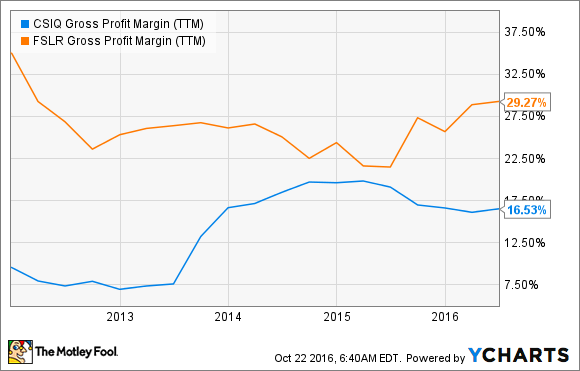 Better margins have also given First Solar the ability to build a better balance sheet.

The best defense that solar companies have against their industry's periodic downturns is a rock-solid balance sheet. And on that front, these companies aren't remotely similar.

Canadian Solar has taken on billions in debt, primarily from short-term borrowings, to fund manufacturing expansion, which is now a weight on the company. First Solar has very little debt and holds a large amount of cash, which offers it a nice cushion when the industry goes through turmoil. 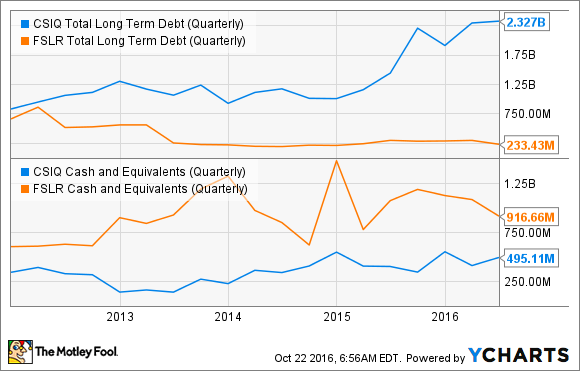 That's especially important right now, because solar panel prices have fallen by around 30% in the last few months to around $0.40 per watt. At that price, Canadian Solar will barely break even on a gross margin basis, making its debt a looming risk.

First Solar will definitely see an impact from the decline in panel prices, but because it had higher gross margins to begin with -- and a stronger balance sheet -- it's in a much better position to handle that.

On the surface, First Solar and Canadian Solar may seem like very similar companies because they are both solar manufacturers and have similar P/E ratios of around 6. But when you dig a little deeper the better company is clearly First Solar. The foundation of starting with better technology has led to a more durable competitive advantage and better margins. Those margins have then allowed for a better balance sheet, which position the company to adapt to the pricing pressure coming in the solar industry.

We're also already seeing that the commodity solar market is in for a rough couple of years as prices fall and competitors begin to differentiate with higher-efficiency products. That puts Canadian Solar in a tough position and will likely lead to falling margins and even losses. Without a rock solid balance sheet that makes the company a big risk for investors. And that's not a risk worth taking in a solar industry that's risky enough to begin with.