Please ensure Javascript is enabled for purposes of website accessibility
Log In Help Join The Motley Fool
Free Article Join Over 1 Million Premium Members And Get More In-Depth Stock Guidance and Research
By Tyler Crowe - Updated Oct 28, 2016 at 9:48AM

Another quarter of volume and price declines offset by more and more assets coming on line.

At this point, the only thing that would be remarkable about Enterprise Products Partners (EPD 0.60%) quarterly results would be if something changed, because the company produced third quarter results that were yet again surprisingly similar to prior quarters. The only thing that was a bit of a surprise, though, was the rather rosy outlook that management gave for the upcoming year. Let's take a look at Enterprise's results and why management is in a good mood about the coming quarters.

Enterprise's earnings results over the past several quarters have had a wash, rinse, and repeat sort of feel to them. Even though transportation, processing, and storage volumes declined across every aspect of the business as well as price declines, overall results have stayed within shooting distance of the prior quarters as new projects continue to come online and offset any losses.

One thing that really sticks out among those numbers is what seems to be a huge decline in distributable cash flow from the same time last year. Keep in mind, though, that Enterprise netted a little more than $1.5 billion in cash from the sale of its offshore pipeline business in July of 2015. On a continuing operations basis, Q2 2015's distributable cash flow was $970. It doesn't show up in the earnings results because at the same time, management announced a $2 billion acquisition of onshore natural gas assets that more or less resulted in a non-taxable asset swap. 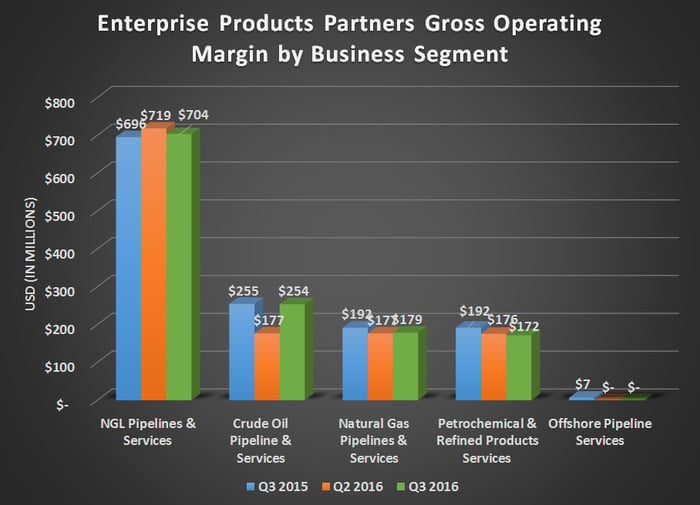 The deal to sell Enterprise's offshore pipeline business took place a few days into the third quarter of last year, so this is the last time we will likely see any more reporting of these results.

Typically, Enterprise's management is pretty mum when it comes to speaking about the business and its outlook during earnings releases. This time around, CEO Jim Teague was much more colorful than normal with some of the things he and the rest of management is seeing in the energy market, particularly in the next year.

We are optimistic that the energy industry has weathered the harshest part of this cycle and very proud of how our businesses continued to perform. While the industry may still experience bouts of commodity price weakness and volatility, we believe it has a firmer foundation going into 2017 as the gap between supply and demand has narrowed and should continue to do so. We are seeing significant 'green shoots' of producer activity as a result of the opportunity to hedge future sales of crude, NGLs and natural gas at economic levels. In addition to the acceleration of investment in the Permian Basin, we are seeing activity attributable to new discoveries, deployment of new technology, including in well-established areas such as the Eagle Ford and Haynesville; and changes in ownership of acreage as some producers emerge from restructuring.

From the perspective of consumers of energy, a substantial increase in demand for natural gas and NGLs is expected from new domestic petrochemical, natural gas-fired power plants and LNG facilities under construction and scheduled to begin operations over the next one to three years. Through the end of 2017, five new ethylene facilities on the U.S. Gulf Coast are scheduled to begin operations that represent 333,000 barrels per day, or 30 percent increase in demand for ethane. In addition, certain refining and petrochemical customers are evaluating new facilities or modifications to existing facilities that will require additional midstream energy infrastructure.

Seeing Enterprise's results remain so mind-numbingly similar from quarter to quarter can make one think that the company isn't doing much lately. On the contrary, it has done quite a bit to maintain similar profitability levels as oil and gas activity across the U.S. is still on the decline. Since the beginning of 2015, the company has put $4.8 billion in new assets to work to offset the declines in its existing portfolio. When we do start to see an uptick in activity -- and according to Teague, it is coming -- then we might see some pretty impressive upticks in Enterprise's results.