For more than a year now, Total's (NYSE:TTE) earnings results have held up much better than others. Part of the reason has been increased production to offset the decline in prices, but the real hero was its refining and chemical segment, which carried the load. This past quarter, though, another unsung hero stepped up to the plate and helped prop up Total's earnings as oil and gas prices remain weak and refining margins start to decline.

Here's a quick rundown of Total's results as well as some of the important highlights investors should know about.

The surprising number in these results is the big uptick in cash flow from operations from the prior quarter. This is something that for quite some time investors have been hoping for as Total's cash situation has been less than ideal for several quarters. To be fair to Total, this is a common problem for all integrated oil and gas companies right now. Looking deeper into the results, though, last quarter's results were heavily skewed by a $1.7 billion increase in working capital while this quarter there was a more modest $265 million drawdown. So perhaps the prior quarter wasn't as bad as it looks on the surface.

The unsung hero for this past quarter was the company's marketing and services business segment, which posted one of its better results in a long time that helped to offset weaker results in both upstream and refining and chemicals. Marketing and services income mostly got a big boost from its New Energies portfolio, which sold the Henrietta solar farm it was developing alongside Sunpower to Southern Company. Upstream saw some modest declines from drops in income from equity affiliates and a higher effective tax rate, while lower refining margins and some major planned downtime for maintenance took a bite out of refining. 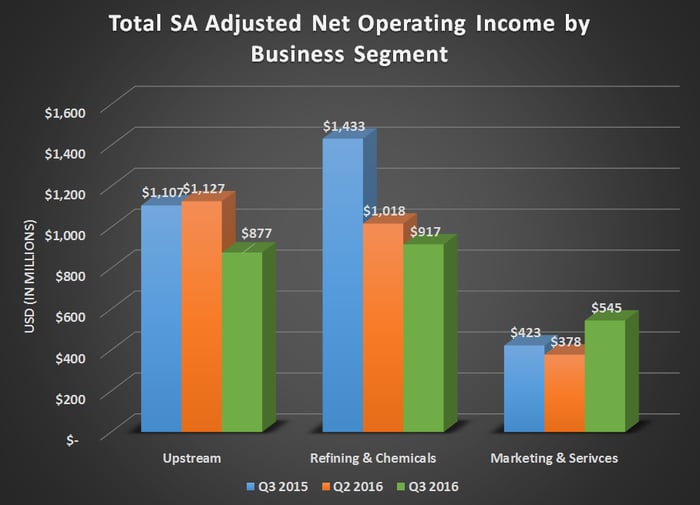 Total CEO Patrick Pouyanne continues to hammer home the same message every quarter: Production is up while operational costs and capital spending decline. This quarter, he was able to add another notable achievement as the company is on track to surpass its goal of reducing operating costs by $2.4 billion.

Total once again reported solid quarterly results with adjusted net income of $2.1 billion and operating cash glow before working capital changes of $4.5 billion. The Group increased cash flow by 13% compared to the second quarter 2016 despite a 27% reduction in European refining margins and flat Brent prices...Discipline on cost control continued. Organic investments were $4.1 billion in the third quarter, and the group plans to invest $18 billion in 2016. Operating costs continues to fall and savings are expected to increase to more than $2.7 billion in 2016, or 10% above the objective set at the start of the year, In addition, the sale of Atotech for $3.2 billion in cash, or close to 12 times EBITDA, was part of the Group's portfolio management strategy to alight its asset base with its ambitions and contributes to achieving the $10 billion asset sale program for 2015-2017.

Total's results were very much what we have come to expect over the past several quarters: Not great because of the decline in oil and gas prices -- and in this case, the slump in refining margins as well -- but reductions to the cost structure coupled with large increases in production helped to offset a decent chunk of these issues. As oil prices continue to creep up slowly, don't be surprised if Total's results start to improve considerably.