On the surface, Chevron's (NYSE:CVX) earnings results pretty much followed the track of prior results: Lower oil and gas prices continued to weigh on upstream profits that were largely offset by downstream operations. But if you look deeper into the results, you can start to see the effects of management's decisions over the past several years to cut costs and make a leaner, meaner Chevron for the upswing.

Here's a quick look at the company's results, how Chevron is doing more with less, and how that will play out over the coming quarters.

After a few quarters in a row where Chevron took several billion dollars' worth of asset writedowns and goodwill impairments, this is the first quarter in a while in which we get to see a "clean" earnings report from the company. Without those charges, Chevron is showing that it's still generating profits, albeit modest ones. The one part of the business that continues to drag things down from a profitability standpoint is its U.S. upstream production. Looking at those numbers in isolation would make it seem that the company is still struggling with eking out a profit from its U.S. operations. If you dig a little deeper, though, you can start to see some of the effects of Chevron's huge cost-cutting efforts. The best way to show this progress is the price realizations the company received for oil and gas this past quarter and the prior year.

So even though Chevron averaged 10% less revenue per barrel equivalent of production, it was able to improve upstream earnings by $405 million.

The one stain on Chevron's earnings is the continued dismal cash-flow gap. The company's operational cash flows are still well short of its capital spending, especially after it committed to the $36.8 billion expansion of the Tengiz project in Kazakhstan with ExxonMobil (NYSE:XOM). This past quarter alone, Chevron spent $2 billion on the expansion.

As a result of this additional spending, the company took on another $500 million in debt for the quarter, and its debt-to-capital ratio jumped to 23.7%.

Typically, Chevron's earnings releases and press conferences are rather dull affairs, but this quarter, the company went into quite a bit of detail about its U.S. shale production in the Permian Basin. Aside from its massive holdings in the basin -- north of 2 million acres -- the company has been driving down costs rather quickly. According to Bruce Niemyer, vice president of U.S. mid-continent operations:

To achieve strong returns, we focus on all elements necessary to generate cash flow-capital efficiency, operating expense, and product realizations. ... [D]evelopment cost per barrel ... in our view, is the ultimate measure of capital performance, as it incorporates all sub-metrics.

We have achieved a 30% development cost reduction from 2015, fully inclusive of drilling, completions, facilities, and associated G&A. We have accomplished this through a focus on improving expected ultimate recovery, driving execution efficiencies, and implementing supply-chain savings. This is delivering capital performance that is competitive with the operators of our joint ventures.

The trend of improvement is mirrored in our overall unit operating expense. ... [T]he downward trend and competitive performance of our direct lease operating expense ... illustrates a significant reduction of 45% from 2015. 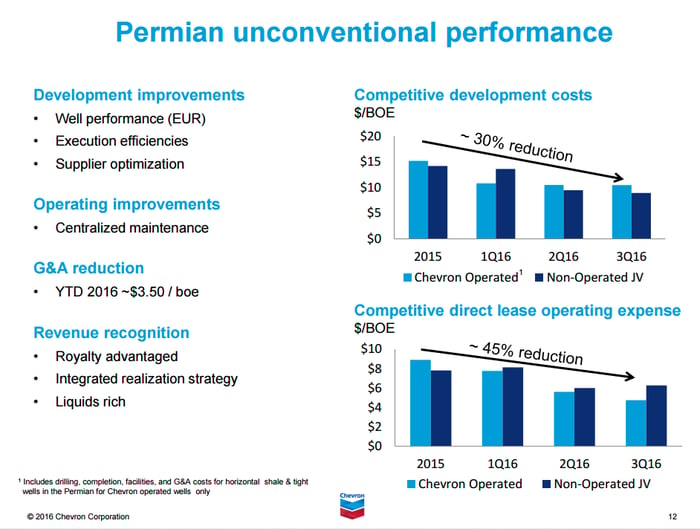 Thanks to these efficiency gains, Chevron is ahead of its production targets for shale without significant additions to its capital spending: 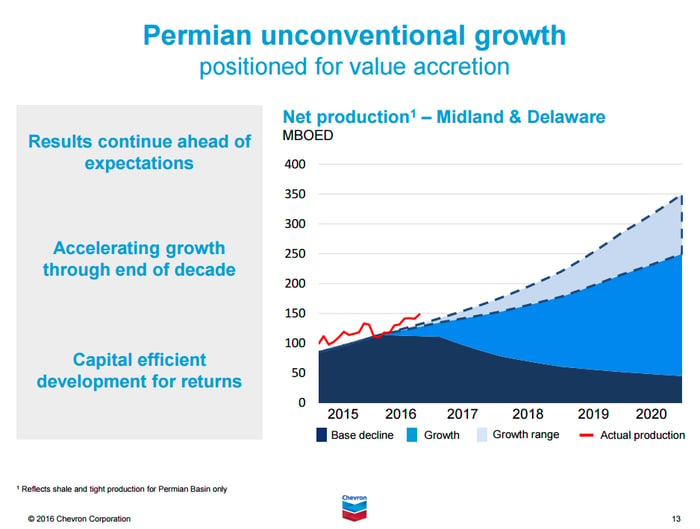 There are some good things coming out of Chevron right now that suggest it's getting back to profitability. The most encouraging sign is the operational cost reductions that have drastically improved upstream results compared with this time last year. At the same time, the company is still struggling with a capital spending gap that's increasing its debt levels to their highest in over a decade. Hopefully, as oil prices improve, this funding gap will repair itself soon and the company can focus on spending within its means and trimming that debt load.