Taking a quick look at Suncor Energy's (NYSE:SU) most recent earnings release, you can barely notice the fact that it shut in large swaths of production after Fort McMurray was ravaged by wildfires in the second quarter of this year. Rather, the company had quite possibly the best quarter it could have, considering the oil and gas market. Let's look at the numbers for this most recent quarter and where the company will probably go from here.

Data source: Suncor Energy earnings release. Figures in millions, except per share data. RESULTS REPORTED IN CANADIAN DOLLARS WERE CONVERTED TO U.S. DOLLARS BASED ON FOREIGN EXCHANGE RATES FOR THE GIVEN QUARTERS PROVIDED BY SUNCOR IN THE EARNINGS RELEASES.

Before making too many comparisons between this quarter and the prior one, just remember that the the company's overall production was significantly hampered from wildfires. For the most part, though, things went exactly as they have at other oil and gas companies this past quarter: Slightly higher price realizations coupled with lower operational costs have improved upstream results, while refining margins narrowed and affected downstream profits. 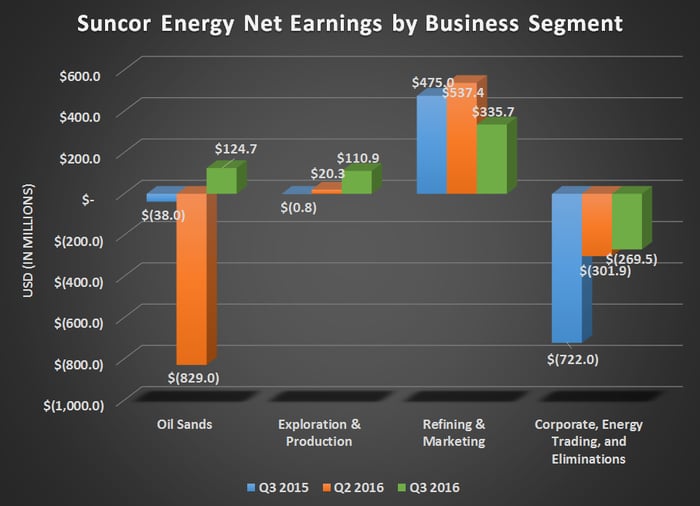 Suncor has been very aggressive over the past year or so regarding mergers and acquisitions. As a result, it has built up a decent-sized debt load that has some investors worried. As a result, there have been rumors flying around that the company is looking to shed some assets and shore up its financials. On the company's conference call, CEO Steven Williams quickly put the kibosh on those rumors:

Rumors and speculation will always be with us, but what I would say is simply judge us by our record. We're not out to build an empire or growth for the sake of growing. Our goal is always to add long-term value for our shareholders. We'll continue to evaluate every opportunity that comes along. But to be clear, I think with prices recovering to a $50 level, there's beginning to be less pressure on sale, and the window of opportunity may well be closing. Certainly for Suncor, this is likely to be the case because we will not chase deals. And to be very frank, we don't need to do any further M&A. With our increased stake in Syncrude already generating strong returns and Fort Hills and Hebron are progressing to completion, Suncor is growing both quickly and profitably. We expect to significantly exceed 800,000 barrels per day of production by 2019, and that's over 40% growth in just four years and represents a 6% per share compounded annual growth rate between 2015 and 2019. It's also a growth that significantly increases our leverage to oil prices, and we expect it to put us among the industry leaders on free cash flow yield forward strip crude prices.

Suncor seems to be pushing all the right buttons when it comes to handling an industry downturn. It has been very aggressive in making acquisitions on the cheap and has done a commendable job of lowering operational costs to generate some form of profit and cash flow despite operating mostly oil sands -- a traditionally higher-cost source of oil. There is a little concern that the company may have stretched itself too thin with all of these acquisitions and aggressive capital spending programs, but the company's debt levels aren't that far out of whack from other oil majors. Also, with its lower cost structure, a modest uptick in oil and gas prices could fix a lot of those issues pretty quick.