The U.S. energy industry is in a state of transition, and there may be no company whose situation exemplifies that more than Duke Energy (NYSE:DUK). As recently as last year, Mother Jones ranked it the dirtiest power company in the U.S., primarily based on the large number of coal power plants it operates. But that report was based on 2013 data, and the Duke Energy of 2016 is rapidly changing along with the rest of the industry. Formerly dirty utilities like Duke Energy, AEP (NYSE:AEP), and Southern Company (NYSE:SO), which were on the top 5 of the dirtiest companies list, are now all leaders in renewable energy. But Duke's transition may be the most surprising given its investments in coal over the last few decades.

As a power supplier, it is still reliant on coal and natural gas to serve customers, but it's also one of the biggest renewable energy owners in the U.S. And as growth in the utility sector diminishes, we will likely see the move to renewable energy accelerate in coming years.

Today, about 2.4 GW out of Duke Energy's 52.7 MW energy generating capacity comes from wind power and solar power. The vast majority of that was acquired in the last few years, and those investments are going to continue. It recently opened bidding for 400 MW of solar capacity in the Carolinas, aiming to meet a mandate that the company meet 12.5% of retail sales from renewables or energy efficiency by 2021.

AEP has a portfolio of 3.1 GW of wind and solar when you include power purchase agreements, out of a total of 31 GW capacity. Southern Company has announced 4 GW of new renewable projects in the last four years compared to its 44 GW of capacity overall. With figures like that, it's not hard to see the trend toward renewable energy moving across the industry. 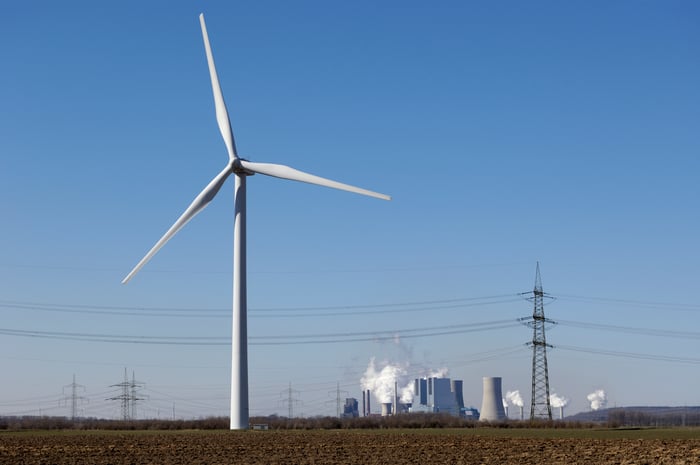 At this point, moving into green energy isn't a political or environmental move for these utilities: They're buying renewable assets for the money.

When a wind or solar power plant is built, it normally signs a power purchase agreement with the local utility for 20 years or longer. This creates a dynamic where cash flows are easily predictable for the project owner, creating a bond-like investment. Utilities can then use the low-cost capital from their consistent utility business to generate strong returns on the projects. Renewable energy is a great investment for utilities.

The recent attractiveness of renewables as an investment is combining with the aging of our coal power plant infrastructure to propel a huge transition in what utilities look like today.

Getting out of the coal business

There are very few coal power plants being built today, and the bigger trend is coal plants being shut down because they're no longer cost effective. In 2014, Duke Energy shut down the 1.4 GW W.C. Beckjord Station coal plant, and this year the Wabash River Generating Station was closed.

In short, Duke Energy is shutting down the dirtiest plants in its arsenal and replacing them with wind and solar. That's a sign of where energy is trending today.

When dirty coal-burning companies become the biggest buyers of renewable energy projects in the country, you know the face of the energy business is changing. And that's exactly what's happened. Duke Energy and counterparts like AEP and Southern Company are investing billions to buy, build, and purchase electricity from renewable energy power plants. And with the nearly guaranteed returns coming from them, they're a better bet than aging coal-fired plants in today's energy business.