HiMax Technologies (NASDAQ:HIMX) investors have been on a gut-wrenching ride this year. Stock price gains early in the year crumbled under the weight of disappointing earnings and downgrades from some analysts later on.

Any publicly traded company isn't immune to either downgrades or a few bad quarters, and neither are necessarily an indicator of a bad stock. But the result has left HiMax's stock price down about 2% for the entire year. With a little more than two months -- and just one more company earnings report -- before the calendar year closes, investors may be wondering if HiMax can pull off a rally before the end of 2016.

If the company is poised to bounce back, here's what it's going to take. First, and most importantly, HiMax will have to deliver on its projected earrings for the third quarter. Here's what those look like, according to the company's management:

It's important for all companies to meet their earnings projections, but it's particularly important for HiMax because of the stock's penchant for wild swings. HiMax investors have both popped and dropped the company's stock several times this year, as you can see from the chart: 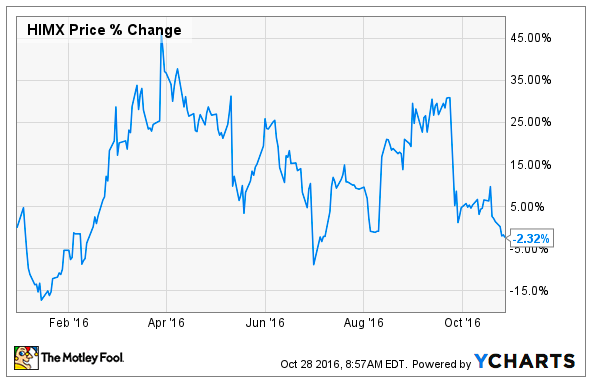 Aside from meeting quarterly projections, any more positive news from HiMax's management about augmented reality (AR) deals could likely push the stock into more positive territory as well.

HiMax CEO Jordan Wu has said that his company is perfectly positioned to grow in the space because it's been working with AR-related technologies for 15 years and already has 30 new and existing augmented reality customers.

The company is expected to benefit from those customers toward the end of this year, particularly in sales of its LCOS (liquid crystal on silicon) and WLO (wafer level optics) technologies. And Wu has said these technologies will be part of a long-term growth story for the company.

About 14% of the company's total revenue for the year could come from AR, so any positive news in this space on the third-quarter earnings would likely fuel HiMax investors' optimism.

Not too much longer now

I've written about the volatility of HiMax Technologies' stock before and -- at the risk of repeating myself -- investors should really keep this in mind. It seems that any subtle news either for or against HiMax sends some of its short-sighted investors into a tizzy, so long-term investors betting on HiMax should know that they're likely in for more ups and down.

But if the company can deliver on its third-quarter earnings, and show that it can continue growing its AR-related sales, then I think its stock price should start moving back into positive territory. The bigger question is whether or not HiMax can truly cash in on AR's growth in the coming years -- and so far, that's still a big unknown.