Himax Technologies' (NASDAQ:HIMX) stock price is up about 5% since the beginning of this year, despite making a huge climb (as high as 50%) just a few months ago. Investors have pushed up the stock on the company's long-term prospects in augmented reality (AR), but unstable revenue and a recent downgrade from a Wall Street analyst have made the stock price a bit unsteady.

The volatility of Himax could easily scare even the most resolute of long-term investors, so let's take a look at what's causing the dips, and what it means for Himax's long-term potential.

Himax's stock price has had some wild swings over the past 12 months: 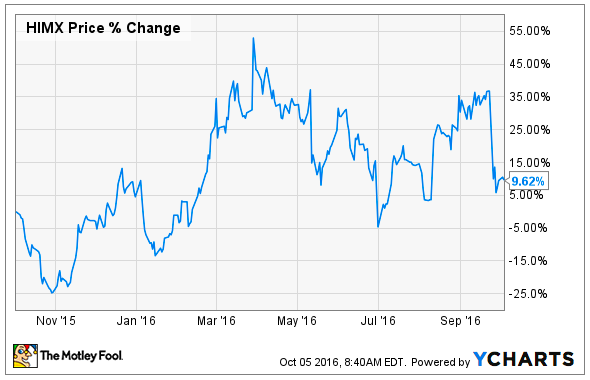 So why all the dips and pops? Most recently, the stock began trending upward on investor hopes that Himax's components were making their way into emerging augmented- and virtual-reality (VR) devices, including Microsoft's HoloLens. Nomura analyst Donnie Teng upgraded the stock in July, and at the same time the company posted a nearly 19% year-over-year increase in revenue. All of that helped push Himax's stock up 18% in August.

But at the end of last month, Teng downgraded Himax's stock from "buy" to "neutral" on news of weak shipments of HoloLens. That sent the company's stock price plummeting more than 16% in just one day and erased much of the large year-to-date gains.

Of course, frequent rises and falls of the company's stock price don't necessarily reflect Himax's business prospects. The company still has plenty of opportunity in the AR space and has already secured some solid design wins with new customers, though it will likely take some time for the full AR and VR potential to play out.

One area that could stabilize things

Aside from AR hopes and fears causing some instability for Himax, the company's unstable revenue isn't helping either.

Himax's small- and medium-driver business accounts for about 45% of the company's total revenue, and revenue in this segment grew just 9% year over year in the most recent quarter.

Here's a look at the company's revenue drop as of late: The most recent dip in revenue came from slowing demand for some of the company's components for smartphones and tablets. But it's not all bad news. The company reiterated its third-quarter 2016 guidance and business outlook for the rest of 2016 just last week.

Himax Technologies said in a release that "in light of the recent unusual volatility of the share price and the abnormally high trading volume, the company highlights its confidence that the overall business prospects remain intact as CEO iterated from the last earnings call."

If Himax is able to deliver on its revenue outlook, and keep revenue stable altogether, then that should help build investor confidence in the stock and alleviate some of the volatility the company has experienced lately.

With the augmented- and virtual-reality markets are still just getting started, there are going to be some ups and downs with any company that's making big bets in these spaces. As long as Himax is continually getting design wins from customers and growing revenue, some of that volatility may eventually fade out.