Wow, that's a lot of money.

Investors have seen Apple's (NASDAQ:AAPL) capital expenditures rise precipitously over the past several fiscal years, as the Mac maker continues to invest heavily in state-of-the-art manufacturing technologies and processes. There's also some retail store renovations and other items such as building out the new Apple Campus 2 (which went over budget by $2 billion a few years ago), but the bulk of Apple's capital expenditures are always allocated to product tooling and manufacturing equipment.

Following Apple's fiscal fourth-quarter earnings release last week, the company has now filed its annual form 10-K with the SEC. In it, Apple says it expects fiscal 2017 capital spending to soar to a mind-boggling $16 billion.

That's an incredible amount of money for a consumer electronics company to spend on capital investments, but it shows how committed Apple is in pursuing new processes that few competitors could afford. To the extent that Apple can use innovative manufacturing processes that rivals are unable to, the company's capital expenditures could even be viewed as a competitive advantage.

For example, design chief Jony Ive is always happy to share Apple's design and manufacturing thought processes in marketing videos. This year, the new Jet Black iPhone 7 required a handful of new techniques (the process sounds ridiculous). Or consider the equipment that Apple must buy to rigorously test the Apple Watch Series 2 to simulate how the device will perform for everyday swimmers.

All of this stuff costs a ton of money.

It's true that Apple actually expected to spend a comparable $15 billion in fiscal 2016, but it turns out that fiscal 2016 capital expenditures came in at "just" $12.8 billion. In fact, Apple usually goes under budget relative to its capital spending guidance. In the past four fiscal years, only one year came in on target, while the rest came in under budget. 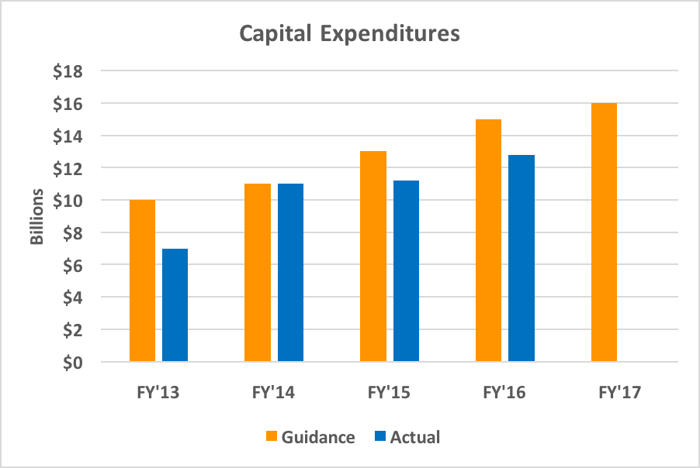 So there's still a decent chance that Apple is just being conservative here and will end up spending less than it anticipates. However, just imagine how high the capital expenditures would soar if Apple planned on actually building a car, a plan that it has seemingly backed away from. Maybe it's the whole building-cars-destroys-capital-like-nothing-else-on-Earth thing.