Earnings season is fun if you're a numbers or investing nerd, as many of the people reading this are, myself included. However, it's also easy, with the plethora of information that hits with all the quarterly figures, to miss a small detail that could change your investing thesis. For some people, that could have happened with Ford Motor Company's (NYSE:F) Europe business unit. Let's dig into the numbers and discuss why the third-quarter's strong results aren't here to stay.

You can't merely scratch the surface

At first glance, the results out of Ford's Europe business unit look impressive, and that's because it was a solid quarter – but there's more to it. Europe delivered $138 million pre-tax profit, which was its sixth consecutive profitable quarter in a row and its best third-quarter pre-tax result since 2007. Investors can even boast that Ford's pre-tax results in Europe jumped 1,433%; from last year's $9 million profit to this third quarter's $138 million.

"Ford sold more than 247,000 commercial vehicles in the first three quarters of 2016 -- an 18.6% increase year-on-year -- and our Transit models are the cornerstone of that success," said Hans Schep, Ford of Europe's general manager of commercial vehicles, in a press release.

On the downside, despite Ford's pre-tax gains in Europe during the third quarter, wholesales were down 15% and revenue dropped from $7 billion down to $6.3 billion, a 10% drop. So, with such top-line pressure, how did Ford generate such a strong quarter in Europe? To answer that, let's take a look at the profit walk. 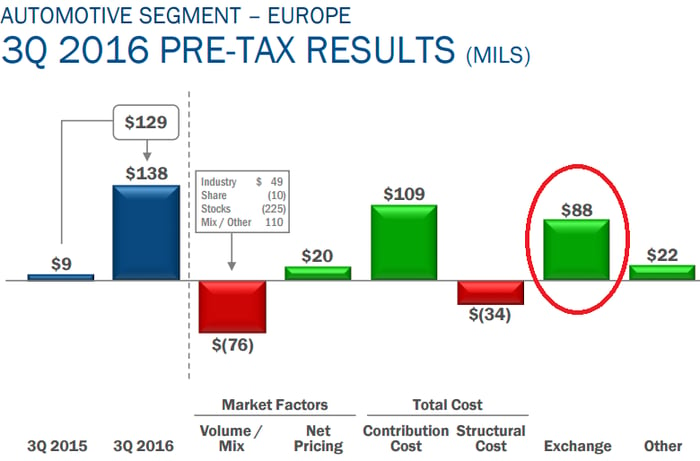 Starting with volume/mix on the left, you can see the positive from an improving mix of more SUV sales and commercial-vehicle sales. However, that gain was completely offset by stocks -- stock reduction in this instance reflects Ford's move to match supply and demand because management believes Brexit will negatively affect the market going forward. That's a headwind that isn't likely to subside and is more likely to get worse. Ford has noted that the impact on earnings could be $600 million in each of the next two years.

Further, if we scoot past the encouraging cost savings, we find ourselves at a positive-$88 million from favorable foreign currency exchange. Sadly, this will be a one hit wonder because Ford was mostly hedged before the U.K.'s vote in June, and that obviously will not be the case next year.

Unfortunately for Ford investors who have trudged through many years following the financial crisis when Europe was burning billions in profits, we're about to hit another rough patch in the region that had just recently begin improving Ford's bottom line. Ford has done an excellent job in Europe. In recent years it's cut costs, improved its sales mix with higher-margin vehicles and launched Vignale, improved its brand image, and freshened its vehicle lineup. Sometimes things are just out of your control, and that's the case with Brexit and the upcoming speed bump in Ford Europe.