Please ensure Javascript is enabled for purposes of website accessibility
Log In Help Join The Motley Fool
Free Article Join Over 1 Million Premium Members And Get More In-Depth Stock Guidance and Research
By Ashraf Eassa - Oct 31, 2016 at 9:57AM

With more time to work on its processor cores, Intel should aim to deliver larger generational leaps to give consumers every incentive to buy new personal computers.

In the past, microprocessor giant Intel's (INTC 3.21%) product methodology was known as tick-tock. This strategy was very simple to understand: In alternating years, the company produced a product known either as a "tick" or a "tock."

A "tick" essentially boiled down to Intel's taking a prior-generation chip design, making some minor enhancements to said design, and then building it in a brand-new chip manufacturing technology. After a "tick" would come a "tock."

A "tock" involved Intel's making significant changes to the underlying design of the processor architecture. However, that all-new architecture would be implemented in largely the same manufacturing process as the prior-generation "tick" product was.

The new development methodology at Intel is known as process-architecture-optimization (let's use the commonly used abbreviation "PAO"). The "process" and "architecture" steps basically correspond to the "tick" and "tock" steps, respectively.

The wrinkle is that, going forward, the company intends to add a third step, known as "optimization." Based on the first "optimization," it seems that with this step Intel doesn't make significant changes to the underlying processor architecture and instead relies on enhancements to the manufacturing technology to ultimately deliver better product performance.

Considering this, it's important that, going forward, Intel delivers essentially game-changing innovations with each of its "architecture" steps, beginning with a product known as Icelake.

Intel now has more time to work on its processor cores

Intel is known to have two major processor core teams. The first is part of Intel's Israel Development Center, or IDC. The second is part of Intel's Hillsboro, Ore., site, known as the Converged Core Development Organization, or CCDO for short. These teams work on new processor cores in a staggered fashion. For example, CCDO developed the Haswell and Broadwell CPU cores that were used in Intel's 2013 and 2014 processor families. IDC developed the Skylake and Cannonlake cores -- the latter likely to be a mild enhancement to the Skylake core -- that Intel has been using since the second half of 2015 and will persist probably until late 2018 or early 2019.

That Intel now plans to use the same fundamental core design for three years, rather than two, means that the company's core development teams now have more time to work on each new processor core.

With additional time to work on these processor cores, Intel's architects should be able to add more features and deliver larger performance boosts generation over generation than they could previously. An extra year of development time is quite a lot and could mean much larger generational improvements.

These future cores must last longer in the marketplace than their predecessors did. In a sense, if Intel wants to be sure that its processors continue to offer industry-leading performance, it's going to have to take larger architectural leaps.

When Intel announced its first Xeon D dense-server processors based on its Broadwell architecture -- a "tick" -- it showed the following graphic illustrating the improvement in performance per clock cycle for each of its cores dating back to the mid-2000s: 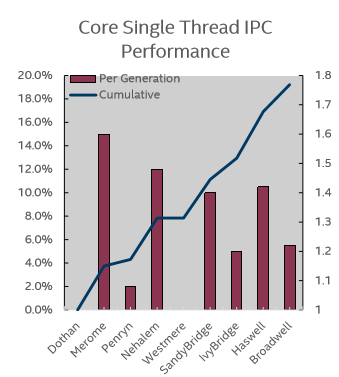 Based on the data shown here, it's clear that Intel's new architectures deliver roughly a 10% boost in performance per clock while its similar architecture on new process cores achieves roughly 5% improvements on that same metric.

Going forward, I think with the additional development time, Intel could achieve more along the lines of a 15%-17% performance per clock with each new architecture, beginning with Icelake, while getting around a 6%-8% improvement with the follow-on version of that core.

These improvements, coupled with potential clock speed increases thanks to improved manufacturing technologies and more aggressive improvements in other areas of the chip, such as graphics, could allow Intel to deliver very compelling new products with each product generation.