Stocks fell slightly on Monday as both the Dow Jones Industrial Average (DJINDICES:^DJI) and the S&P 500 (SNPINDEX:^GSPC) indexes finished the session with minor losses ahead of an important Federal Reserve meeting on Tuesday and a highly anticipated employment report later in the week.

The iShares Emerging Markets Index (NYSEMKT:EEM) rose by 0.6% as investors prepared for potentially market-moving events in the coming days, including a Federal Reserve monetary policy meeting beginning on Tuesday and a monthly jobs report due out on Friday. The United States Oil Fund (NYSEMKT:USO), on the other hand, slumped by 4% as oil prices took another step below $50 per barrel on fears of a continuing supply glut.

Lumber Liquidators stock dove 16% after its third-quarter report failed to please investors. There were several bright spots in the announcement, to be sure. The retailer managed its first year-over-year sales increase in six quarters. Comparable-store sales rose by 1%, marking a nice recovery over the prior quarter's 4% drop. Gross profit margin also ticked up, rising to 31% from 30%.

Yet the business is still reeling from the effects of last year's bad press around the safety of its Chinese-sourced flooring products. Lumber Liquidators posted much higher costs, especially in advertising and labor, as it spent heavily to try to regain customer loyalty. These moves helped arrest the slide in shopper traffic, but they hurt the bottom line. Net loss ballooned to $18 million from $9 million last year, equating to a loss of $0.68 per share. Consensus estimates were calling for much less red ink, to the tune of a $0.31-per-share loss. Meanwhile, other red flags included higher inventory levels and a sharp drop in cash balance, down to $9 million from $27 million a year ago.

"We are pleased with the direction of our sales performance this quarter but recognize we have work to do to restore Lumber Liquidators to growth and profitability for the long term," CEO John Presley said in a press release. Until financial trends improve, though, it's hard to blame investors for demanding more from this stock. 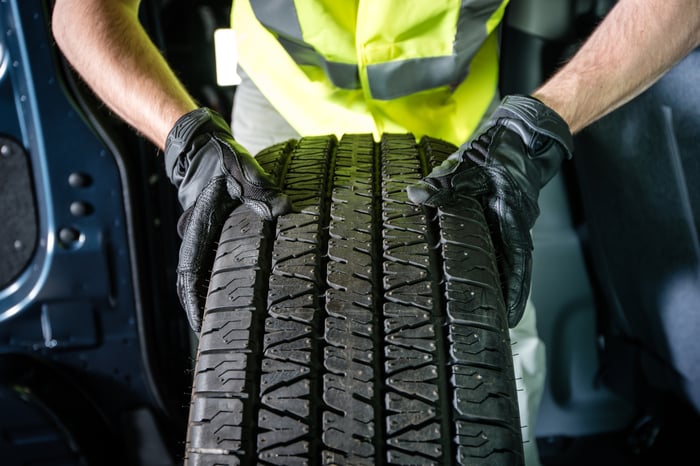 Cooper's net income fell 6%, because of a non-cash pension settlement charge. Adjusting for that expense left operating profit at $90 million, or 10% higher than last year's result. Profitability, at 12% of sales, was above management's long-term guidance.

"Cooper generated another strong quarter of operating profit, achieving a record for the first nine months of this year," CEO Brad Hughes said.

It's good news that the tire giant expanded profitability in its U.S. division while expanding market share. The international segment also posted its second straight quarter of positive earnings. That all sets the stage for what Hughes and his team believe will be a return to solid volume growth in the fourth quarter. Challenges on the horizon include higher raw-material costs and more price cuts by the competition. But the company appears well positioned to outgrow the industry and make decent profits in the process.