NVIDIA (NASDAQ:NVDA) has become something of tech darling among investors lately. The company's stock price is up nearly 150% over the past 12 months, and part of the investor optimism is being fueled by three key opportunities for NVIDIA: virtual reality, semi-autonomous cars, and gaming.

Let's take a quick look at how each market is growing and why NVIDIA is likely to benefit,

The virtual reality (VR) market started coming into its own in 2016. Facebook's Oculus, HTC, and Sony all released their VR headsets this year. That's spurring lots of VR interest among consumers, and it's only expected to grow from there. Here's what the growth for worldwide VR users is expected to look like over the next few years: 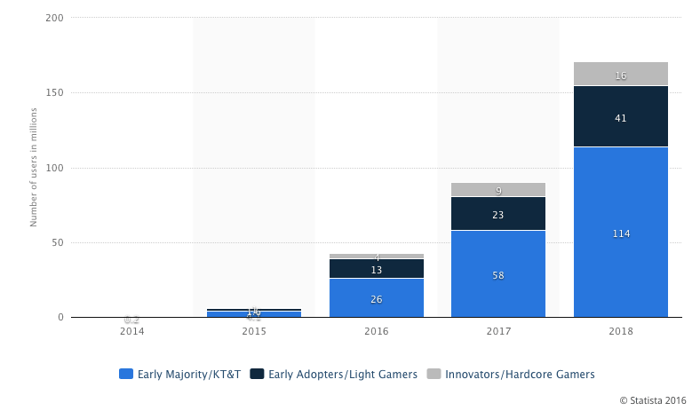 Worldwide, there are about 43 million VR users right now, but that number's expected to balloon to 171 million just two years from now.

NVIDIA said earlier this year that less than 1% of all computers sold in 2016 will be VR-capable, which means that the PC world is ripe for more VR growth -- and NVIDIA is delivering.

The company launched three new graphics cards a few months ago -- the GTX 1080, 1070, and 1060 -- which all bring VR capabilities to notebook computers. That's a big step for NVIDIA because packing enough graphics processing into a portable computer is much harder than in a desktop. The cards come within 10% of the graphics computing power of desktop equivalent cards, according to the company, and are big step for NVIDIA in grabbing more the virtual reality PC market.

NVIDIA already holds about 70% of the discrete desktop GPU market share right now, which puts the company in prime position to be the graphics card maker of choice for PC makers in the future. And with the addition of its new graphics cards for VR-capable notebooks, NVIDIA should be able to benefit from VR's growth on both desktop and portable computers.

Semi-autonomous cars are taking off

Fully autonomous cars seem like a long way off, but the pace of semi-autonomous vehicles (which can handle certain functions like braking and lane-changes on their own) will make them a reality sooner than you might think.

Boston Consulting Group estimates the partial and fully autonomous market will be worth $77 billion by 2035 and IHS Automotive estimates that between now and 2035 there will by 76 million cars sold with some level of autonomy.

NVIDIA's already on its second-generation version of its driverless car supercomputer, called Drive PX 2, and the company said that Tesla's own supercomputer (used to power semi-autonomous features in new versions of its Model S, X, and upcoming Model 3) will "be powered by the NVIDIA's DRIVE PX 2 artificial intelligence computing platform."

That's a big win for NVIDIA, but that isn't the only automaker betting on NVIDIA. More than 80 automakers and Tier 1 automotive suppliers are using versions of Drive PX 2 as well.

The company brought in $119 million from its automotive segment in fiscal Q2 2017, which represents just 8% of its total revenue. But NVIDIA grew its automotive revenue 68% year over year, and with semi-autonomous vehicle technologies growing quickly, NVIDIA is sure to benefit in the coming years.

Gaming is still a solid bet

Last, but certainly not least, NVIDIA's current and future prospects in the gaming market look great. Gaming is the company's largest business, bringing in about 55% of total revenue in fiscal Q2 2017.

The PC gaming market is continuing to expand, and NVIDIA's dominance in the desktop GPU market should help the company grow along with it.

PricewaterhouseCoopers says the global gaming market will grow by 4.8% annually between 2015 and 2020, and PC gaming is growing at an even faster rate of 6.3% over the same time. NVIDIA's already proved that it's benefiting from these trends. The company's GPU gaming sales increased 17% year over year in fiscal Q1 2017, and then grew by 18% on a yearly basis in Q2 2017.

With NVIDIA's current dominant desktop GPU market share and the gaming market set for more growth, NVIDIA should be able to continue to easily benefit in this segment for the foreseeable future.

It's already been a great ride

NVIDIA's current stock price growth has already been phenomenal over the past 12 months, with much of the optimism stemming from the opportunities above.

The company does face increased competition from GPU rival AMD in gaming and VR, and will have to contend with Qualcomm and its planned purchase of NXP Semiconductors in the automotive space. But I think NVIDIA's strong GPU offerings and its dominant position in many of its markets should help the company remain a key player in all of these opportunities over the coming years.