In a prior column, I went over why investors in Intel (NASDAQ:INTC) shouldn't freak out over the company's increased investments in its lucrative and fast-growing data-center group, or DCG.

Here, I'd like to go over three areas in which Intel is likely beefing up its investments within DCG.

The bulk of Intel's DCG revenue comes from the sale of processors and related chipsets, but the company has been talking up the growing importance of complementary non-processor components to its businesses. 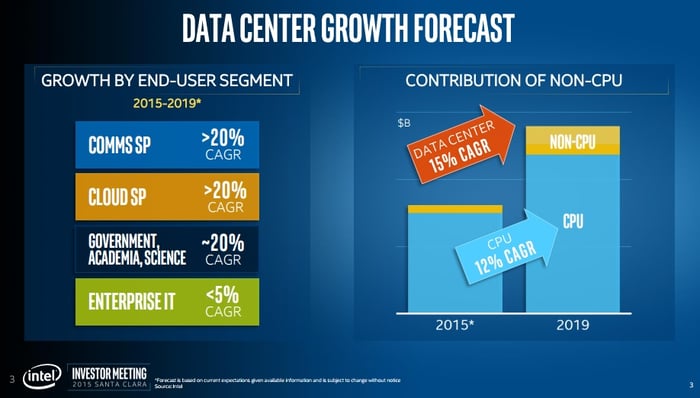 The examples of such technologies that the company routinely cites in investor presentations are 3D XPoint memory modules, silicon photonics, and its proprietary Omni-Path fabric for high-performance computing applications. It seems likely that the company is spending more money to put additional development resources on these projects, particularly as the company is banking on these technologies to help boost the long-term growth rate of DCG.

Analyst Romit Shah recently postulated that part of the spending increases on Intel's part could be a "defense move" on Intel's part that could potentially include "more custom projects" in a bid to "stem market share loss." Indeed, back in 2014, Intel's data-center general manager, Diane Bryant, indicated that the company integrates custom features into its server processors for specific customers and is even working with potential customers on "fully custom" processors. 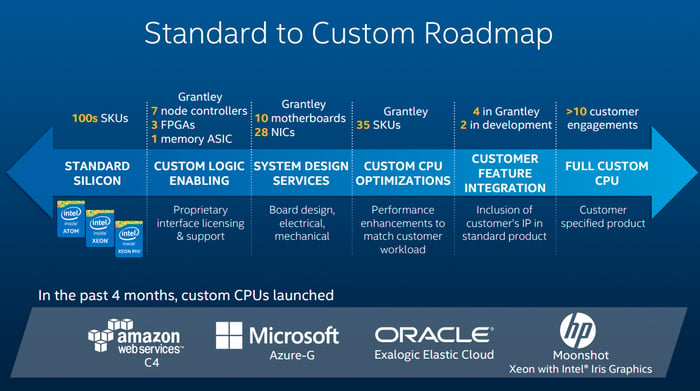 Considering this, I wouldn't be surprised if the company were investing more in DCG to be able to support a greater number of semi-custom and fully custom processor projects for major high-volume customers, with, perhaps, the bar for what constitutes a "worthwhile" project coming down a bit.

Intel has always been good at building very high-performance, power-efficient processors. Going forward, being able to build best-in-class processors will certainly continue to be a key point of differentiation and a large part of Intel's value proposition in the data center.

Intel has also been more aggressive in pursuing technologies that can be used to dramatically speed up certain specialized workloads, broadly referred to as accelerators.

Accelerators come in many forms, from dedicated hardware integrated into the same chip as the main processor to co-processors that work alongside the main processors. Unsurprisingly, Intel CEO Brian Krzanich thinks that accelerator technologies can help to boost the growth of DCG.

"So we look at those accelerators as enhancing this growth," Krzanich said on the company's most recent earnings call. He further went on to claim that Intel has the "widest" portfolio of accelerator technologies, "from FPGAs through the Xeon Phi and then into [application-specific integrated circuit] driven devices."

It stands to reason, then, that to support this set of technologies and to develop even more of them down the line, the company is going to need to invest more in terms of money and human resources to develop them. It wouldn't surprise me one bit to learn that a doubling down on these accelerators was part of the spending increases in DCG.

Investing now is the right thing to do

The last thing Intel needs is to be caught flat-footed in its data-center business, so investing today to ensure that it's in a strong competitive position tomorrow is conceptually the right thing to do.

Increased investments do hurt near-term profitability, which stockholders, particularly in businesses as large and mature as Intel, don't like. However, it's better to pay the price now and reap the rewards later than to maximize profitability now only to have things fall off a cliff down the line.