BP's (NYSE:BP) third-quarter earnings were in line with the overall trends we have seen in the oil and gas industry over this past quarter: a slight uptick in oil prices accompanied by a sharp contraction in refining margins. Thanks to continued cost-cutting and a timely gain, BP was able to recover from a big loss in the second quarter to post a respectable profit. On top of that, the company made some big announcements about its capital spending for this year and next. Here's a quick look at BPs results and how the company plans to change up its spending over the next year and a half.

One thing that makes BP's results look slightly better than they are is the fact that its upstream results have some one-time gains baked into them. The company received a non-operating gain of $1.4 billion from an asset impairment reversal. Those impairments were the same thing that has been hitting earnings so hard in the past several quarters. As oil prices rise, though, some of those assets can be added back to the books. From a pure operations standpoint, though, upstream earnings were a bit weaker from an unusually high level of turnaround and maintenance work that lowered production by 2% compared to this time last year after adjusted for asset sales.

For the rest of the business, things didn't look as hot. The refining business suffered as product margins narrowed again. This is to be expected, however, as rising oil prices have narrowed the price spread between crude oil and refined products. Also, 2015 was a banner year for refiners, so no one should expect those kinds of results repeatedly. BP's 19.7% stake in Rosneft also didn't look as productive, but the company did acquire a 50% interest in another Russian oil and gas company -- Bashneft -- so it is setting itself up for some huge gains when oil prices do rise again. 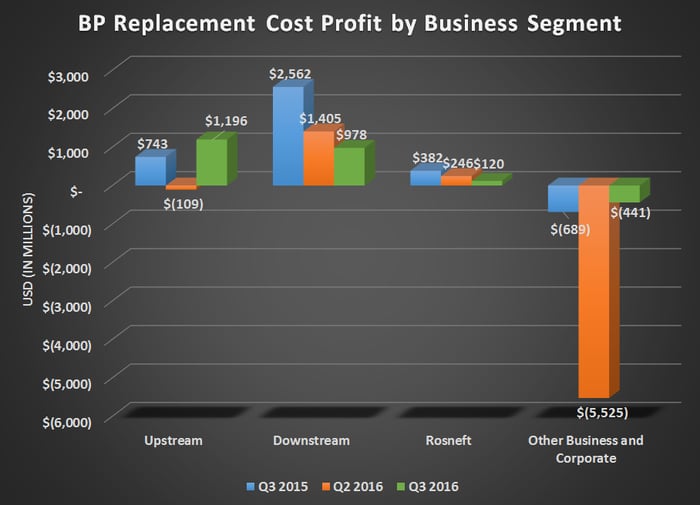 BP's operational cash flow of $2.5 billion for the quarter does look considerably lower than even in the prior quarter where we had similar oil & gas prices, the big difference, though, was that the company had a $1 billion buildup of inventory in the quarter. So not quite as bad as it looks. In fact, for the fiscal year 2016, cash from operations has outpaced capital spending. There aren't many integrated oil and gas companies that can claim that feat right now.  BP ended the quarter with $32.4 billion in net debt and a debt-to-capital ratio of 25.9%. This is up from 20% this time last year but within management's target range of 20%-30%.

Perhaps the most important thing coming out of this past quarter was the lowering of cash costs on both the operational and expenditure side of things. As of this quarter, operational costs are $6.1 billion less than in 2014. This puts BP on track to realize its goal of $7 billion less in cash costs for operations in fiscal year 2017. That reduction, combined with the reductions in capital spending, means that BP sees its per barrel breakeven point in the $50-$55 per barrel of oil.

Part of that reduction in capital spending came after the company announced it was no longer continuing with its exploration program in the Bight Basin off the southern coast of Australia. Since this is such an early-stage development, it won't impact production or earnings in a meaningful way. One of the reasons that this may not be much to worry about is that the company continues to consolidate holdings around a massive natural gas field it discovered in the Nile delta off the coast of Egypt. BP announced that it had signed concession agreements for three offshore blocks that will allow the company to fast track the development of this project.

BP is still trying to get its costs under control more than two years after oil and gas prices started to decline. So far, though, the company has done a rather commendable job. Its cash costs are down significantly and capital spending budgets look much more modest. Thanks to some very large field discoveries, BP can scale back its spending without taking a huge hit from a production growth standpoint, and that is allowing it to reduce its breakeven per-barrel price to a decent range of $50-$55.

We're not out of the weeds yet in terms of this oil downturn, and let's not forget that BP still has that big Deepwater Horizon cost overhang to deal with in the coming years.