Tesoro's (NYSE:ANDV) third quarter earnings weren't the best ones the company has ever had. Then again, earnings across the board for refiners haven't exactly been robust this past quarter. Weaker refining margins and some higher costs to bring its newest refinery online pretty much wiped out operating income from its refining arm. What investors will most likely be intrigued about, though, is Tesoro's recent acquisition that has flown under the radar. Let's take a look at the company's most recent results as well as a small move that could have a big payout down the road.

*in millions, except per share data. Source: Tesoro earnings release.

What really jumps out in those quarterly results is the drastic drop in earnings from the prior quarter to this one even though revenue was higher this third quarter. This isn't a product of the company's operating costs getting out of hand -- although per barrel costs did increase by $0.27 per barrel of crude for the Dickinson, North Dakota refinery it recently purchased -- rather, it had to do with a large non-cash gain from an inventory valuation last quarter. Without it, earnings could have been $1.67 per share.

The big takeaway lesson in this quarter's earnings was it shows how fixed a refiner's operating costs really are. From an operations perspective, the company did rather well. Refinery utilization remained high at 98% while direct operating expenses, SG&A expenses, and depreciation expenses were only a few million more than this time last year. But weakening refining margins per barrel are what sunk the company's profits. 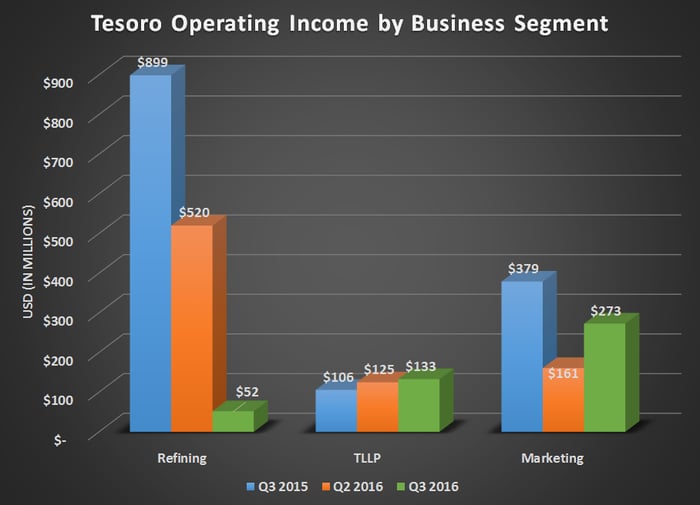 The one place where the company saw improvement was in its logistics segment. Part of that had to do with increased distributions from its subsidiary partnership Tesoro Logistics Partners (NYSE:ANDX), but another part was from the addition of pipeline and storage assets in the Los Angeles area and the Alaska Storage and Terminaling assets that were bought last year and then subsequently dropped down to Tesoro Logistics Partners for $444 million.

This was a rather quiet quarter for Tesoro operations wise. But there was one small acquisition that is worth mentioning. It bought renewable fuels and chemical company Virent for an undisclosed amount.

This may not sound like much, but the reason the company decided to do it was critical to the success of refining in the future. The idea behind Virent's business is to be able to manufacture biofuels to blend with conventional fuels at the refinery itself, rather than today where they are blended at a distribution terminal. In doing so, it will help Tesoro meet the costs that come with complying with the US EPA's renewable fuels standards. Since the company could do the blending at the refinery, it would help it skip the process of needing to buy renewable fuel credits that are generated at the blending terminal. The costs for these credits -- known as RINs -- have been skyrocketing lately and have caused refiners across the country tons of headaches.

If Tesoro could find a lower cost way to comply with these renewable fuel standards, it would put them at a massive advantage over the rest of the industry.

It appears that management has big plans for this Virent deal. When the acquisition was announced, CJ Warner, EVP of Operations, hinted that this deal could mean more than just compliance for Tesoro

Tesoro intends to foster more rapid commercialization of Virent's renewables technology, which could uniquely position the Company with an improved means of future regulatory compliance, as well as potential licensing opportunities. Tesoro plans to provide resources and expertise to support the scale-up and commercialization of the technology while maintaining Virent's innovative culture and business that are key to its success.

The thing that stands out in that statement is "licensing opportunities." Again, if Tesoro can prove this out and find a much more economical way to comply with the EPA regulations, it could even monetize that tech by selling it to other refiners that have seen their costs explode lately.

Having Virent technology in its back pocket could prove valuable in the long term, but this is still an early stage development upon which no investor should hang their entire investment thesis. For the time being, that needs to remain focused on Tesoro's ability to be an efficiently run refiner that keeps costs down. This quarter, the company did a decent job of that, but there is still work to be done to bring its new Dickinson refinery in line. If it can continue to do that and find a way to make Virent's technology commercial, then Tesoro could be headed for some good times in the future.