Games are the most popular category in the App Store, where Apple only recognizes the net commission that it earns through the agency model. Image source: Apple.

In January of this year, Apple, Inc. (NASDAQ:AAPL) did something peculiar. The Mac maker introduced a new non-GAAP metric called "installed base related purchases." The new metric was provided since Apple accounts for content sales in different ways depending on if it's using the wholesale model or the agency model. iTunes purchases have historically used the wholesale model (Apple recognizes the full gross transaction amount) while third-party apps sold on the App Store used the agency model (Apple recognizes only the net commission that it keeps). Installed base related purchases represented the gross dollar amount of content that users were purchasing, irrespective of the underlying accounting.

At the time, Apple also used the opportunity to point to a different non-GAAP metric of constant currency revenue growth, in order to contextualize the havoc that the strengthening dollar was causing on the reported results. While Apple quickly stopped using constant currency revenue growth, it continued to report installed base related purchases in what I viewed as a concerted effort to shift investor focus away from iPhone unit sales toward recurring services revenue.

There was no disclosure of installed base related purchases when Apple reported its fiscal fourth-quarter results last month. Management didn't even mention it on the call. The absence of this disclosure was unexpected since Apple had introduced this metric so recently. Combined with the year-over-year comparisons, investors could start to form a picture of how this metric was trending. As a finance nerd, I must admit that I was actually looking forward to completing the picture to see how installed base related purchases fared over the past couple years.

Apple previously provided data for the first three fiscal quarters for 2015 and 2016. 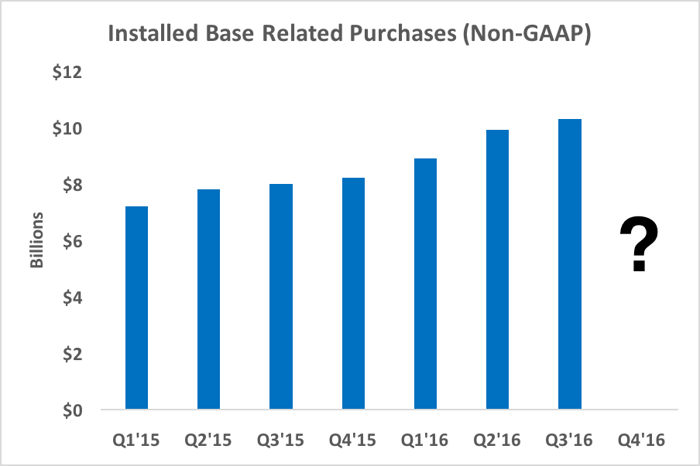 While we don't have the Q4 2016 number, we can say that that the first three quarters of fiscal 2016 alone generated more digital content sales ($29.1 billion) than all of fiscal 2014.

To GAAP or not to GAAP, that is the question

The more important question for investors to ask is why did Apple stop disclosing this non-GAAP metric? Did management suddenly deem this metric to be not useful? After all, the original rationale for creating it was: "Apple considers non-GAAP installed base related purchases to be a useful metric for investors and management as it provides a more complete picture of the transactions generated by the installed base." It's unlikely that there is some troubling trend in content purchases that Apple is trying to hide, either.

It's completely true that the use of non-GAAP financial metrics has gotten out of hand in recent years. Perhaps the culmination of this abuse actually occurred years ago when a freshly public daily deals company wanted to start reporting "adjusted consolidated segment operating income," before the SEC stepped in and said it was just ridiculous. Well, the SEC has stepped in throughout 2016 and warned public companies to back away from non-GAAP metrics, cracking down on a number of companies across many industries with strongly worded letters.

For the most part, Apple has been a strong role model in terms of avoiding non-GAAP metrics. Before this year, the last time that Apple used non-GAAP metrics was when it was required to account for iPhone sales using the subscription model, which went away in 2009. The company still includes non-cash costs like stock-based compensation, likely the most popular exclusion in non-GAAP figures, in its results. It's possible that Apple's move away from non-GAAP metrics is merely conservatism with how it reports to the SEC, but I'm still curious.