Investing in restaurant stocks can be remarkably profitable, especially for investors who buy high-growth companies in the restaurant sector at opportunistic prices. For different reasons, Chipotle Mexican Grill (NYSE:CMG), Shake Shack (NYSE:SHAK), and Zoe's Kitchen (NYSE:ZOES) are all under considerable selling pressure lately, and the three companies are attractive candidates for investors hunting for bargains among the best restaurant stocks.

Back in August 2015, Chipotle stock was trading as high as $750 per share. At the time of this writing, shares of the fast-casual burrito chain are trading near their 12-month low, in the neighborhood of $365 per unit. The food-safety scare that hit its restaurants last year is having a considerable impact on Chipotle's financial performance.

Chipotle reported a 14.8% decline in revenue during the third quarter of 2016, to $1 billion. Comparable-store sales fell 20.1% year over year, while comparable traffic declined 13.4% from the third quarter of 2015. The company is still making money, but restaurant-level operating margin declined by more than half, from 28.3% to 14.1%. When looking at these numbers, it's easy to understand why investors in Chipotle are going through so much pain.

On the other hand, the following chart that the company provided in its earnings release shows that revenue trends are starting to stabilize. It's far too early to say that Chipotle is out of the woods yet, but the worst could already be over. 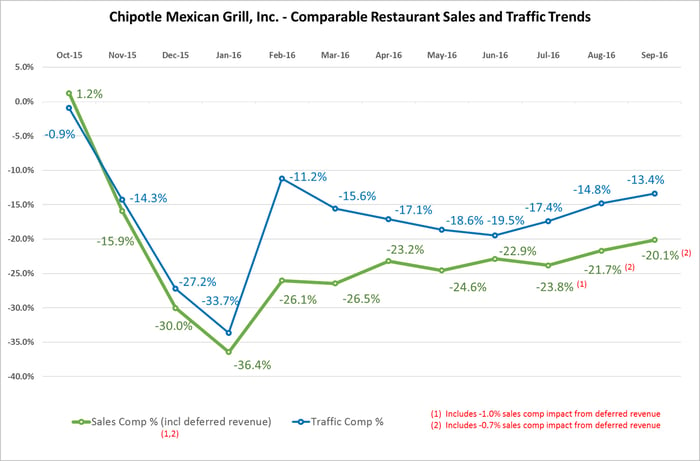 Other companies in the restaurant sector have fully recovered from similar setbacks related to food safety, and Chipotle is doing its part, undertaking a massive effort to regain customer trust. Among other initiatives, the company has completely revamped its food-safety program, while also betting on new menu items and aggressive promotions to bring customers back to the stores.

Chipotle is planning to open 195 to 210 new restaurants in 2017, and management believes that comparable restaurant sales will increase in the high single digits versus 2016 levels next year. If the company can in fact deliver in accordance with guidance, jump-starting revenue growth could be a powerful return driver for Chipotle stock in the mid-term.

Successful innovation isn't just about doing new and unexpected things. Shake Shack, for instance, has a classic and traditional menu based on hamburgers, hot dogs, and shakes, but it differentiates its offering from the competition by offering fresher and more natural ingredients. Shake Shack is particularly popular among millennials, a key demographic group in the industry.

Shake Shack stock is down by 40% from its highs of the past year, which is mostly due to investors' disappointment with slowing same-store sales at the better-burger restaurant chain. The company registered a 4.5% increase in "same-Shack sales" last quarter, a material deceleration versus a 9.9% increase in the previous quarter.

However, investors may be missing the big picture if they put too much weight on comparable sales figures. Shake Shack only includes in same-Shack sales the stores that have been opene for more than two years. Since the company is expanding its store base at full speed, this approach can materially underestimate overall revenue growth.

When looking at total sales, things are much more exciting, total revenue amounted to $66.5 million last quarter, growing by 37.2% over the same period in the prior year. In a sign of confidence, management also raised its revenue guidance for the full fiscal year 2016, from a range of $245 million to $249 million to a new range of $253 million to $256 million. The company generates extraordinary profitability: Restaurant-level operating margin was at a record high 30.8% last quarter.

Zoe's Kitchen reported sales figures below Wall Street forecasts last quarter. Since the stock is priced for demanding growth expectations, the market was rather unforgiving in its reaction to the earnings report, and Zoe's Kitchen stock has fallen by a staggering 37% in the past year.

It's never nice seeing financial performance coming in below the company's own guidance, but the numbers don't look too dismal when analyzed in a broader context. Total revenue at Zoe's Kitchen grew 21.7%, to $66.3 million last quarter, while comparable restaurant sales jumped 4% year over. According to data from Black Box Intelligence, comparable-store sales across the restaurant industry declined 1% in the third quarter of 2016, so Zoe's Kitchen is significantly outperforming most competitors.

Zoe's Kitchen specializes in fresh, preservative, and additive-free Mediterranean dishes. Many consumers are increasingly conscious about the health implications of nutrition, and Mediterranean food is generally considered much healthier than other food choices, so the company is well positioned in relation to industry trends.

Zoe's Kitchen currently has 183 company-owned restaurants and three franchised locations, and management believes it has enough room for 1,600 stores in the U.S. over the long term. Even if it could take considerable time for Zoe's Kitchen to reach such scale, the company still has abundant room for expansion over the years ahead.