Shares of Brazilian oil company Petrobras (NYSE:PBR) climbed 25% in October. The big gains came on the back of two pivotal policy decisions from the Brazilian government that eases the cost burden for the state-owned oil company.

Operating in Brazil was tougher for major oil companies because of two key government policies. One was that Petrobras had to be the operator and have a 30% minimum working interest in any development of its massive offshore pre-salt fields. The other policy was that all oil and gas operations needed to meet certain local-content rules for Brazilian-made products and labor.

The downside for Petrobras with these regulations is that it had to bid on every offshore drilling license in the pre-salt field, and that 30% operating stake usually meant it was spending a lot of money for development. Also, those local-content laws were becoming very convoluted and typically meant that oil and gas operations in Brazil were much costlier than in other parts of the world. 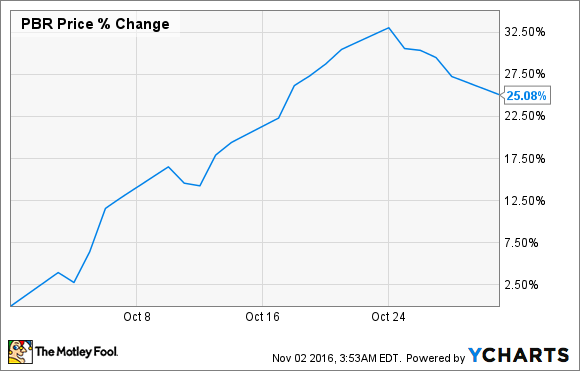 This has increasingly become a problem for the company as oil prices have declined and the capital to develop those fields simply isn't there. Since 2013, when many of those policies were enacted for the pre-salt fields, Petrobras' capital investment levels have declined by 50%. It also doesn't help that Petrobras is already sitting on a massive debt load that will be extremely difficult to manage.

This past month, though, the Brazilian government started to notice the burden these policies put on its state-run enterprise and decided to make some changes. Now Petrobras has right of first refusal on offshore blocks. Also, while the Brazilian government hasn't ironed out the specifics of the new local-content rules, one of them will involve lifting the requirement that companies set local content targets when making project bids -- something that caused companies to bid unattainable local content percentages to win contracts.

The big win for Petrobras in all of this is that it will be able to significantly lower its capital spending targets in the coming years because it doesn't need to bid on everything and lower costs from trying to meet impossible local content percentages. Hopefully, over time, these will allow the company to better control costs, improve profitability, and use those profits to ease its debt load.

That will take some time, though, and investors need to be cognizant of the fact that the company is still struggling with higher costs, subsidized refined product prices in Brazil that constrict refining margins, and a debt load that needs to be controlled before the company can be a worthwhile investment. If it can prove to be profitable in the coming years from these policies, then Petrobras will be worth revisiting. In the meantime, though, it's probably best to sit on the sidelines of this one.