Midstream general partner ONEOK (NYSE:OKE) continues to benefit from the growth of its master limited partnership, ONEOK Partners (NYSE:OKS), which completed construction of several fee-based assets this year. Those new additions fueled a 12% jump in ONEOK's net income, while its adjusted EBITDA rose 15%. Meanwhile, earnings growth at the MLP was even stronger, due to across-the-board improvements at all three of its operating segments: 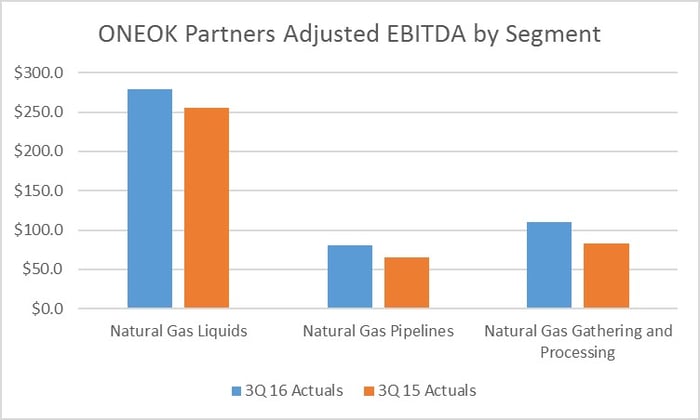 CEO Terry Spencer was upbeat on both companies' results, saying:

ONEOK continues to benefit from ONEOK Partners' well-positioned assets and resulting volume growth from recently completed capital-growth projects... including the Bear Creek natural gas processing plant in the Williston Basin and related NGL gathering infrastructure, and the second phase of the Roadrunner Gas Transmission pipeline and complementary ONEOK WesTex expansion project in the natural gas pipelines segment. All of these projects are expected to contribute primarily fee-based earnings and stable growth to the partnership as we exit 2016.

These expansion projects enabled ONEOK to add new volumes and more than offset weaker volumes in some of its other service areas. Overall, natural gas volumes processed increased 13% while NGL volumes fractionated edged up 3%. The company expects its volumes to continue to increase as customers ramp up activities now that new capacity is on line. For example, Spencer said that its Bear Creek plant was only 50% utilized last quarter, but the company sees volume growth in the Williston Basin rising in the fourth quarter and benefiting that asset and the company's associated infrastructure in the region.

Thanks to the growing volumes at ONEOK Partners, Spencer said that ONEOK "expects to finish 2016 in line with financial guidance." Meanwhile, Spencer noted that the MLP has a healthy balance sheet and is using its excess cash and rising earnings to reduce its leverage. Because of that, "we're in a strong position, and we have the flexibility to take advantage of opportunities to create additional shareholder value," he said.