Stock prices don't require actual news to move up or down. Ameresco demonstrated that on Oct. 3. Image source: Getty Images

Shares of Ameresco Inc (NYSE:AMRC) closed down 10.3% on Nov. 3. This put the company's stock price essentially back to where it started on Oct. 31, the day before the company released its third-quarter financial results: 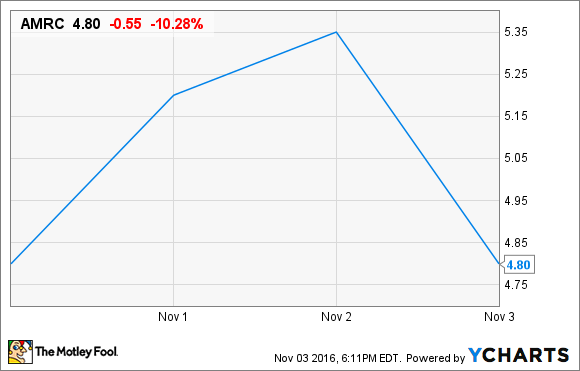 Frankly, nothing was reported as happening today that's clearly responsible for knocking its share price down so much and erasing Ameresco's post-earnings gains. No company announcements or SEC filings. No analyst downgrades or news of contract cancellations.

What made this especially interesting was that Ameresco's earnings report was relatively solid. With the exception of a small, but not completely unexpected, decline in revenue, net income, earnings per share, and operating income were all slightly higher than the year-ago quarter, while the company's fully contracted order backlog was up 17% year over year, which bodes well for future quarters.

Probably the biggest two things that affected Ameresco's share price today was how thinly traded its shares are and how low its market capitalization is. Founder and CEO George Sakellaris has a majority stake in the company, which removes a lot of its shares from the potential daily trading pool. Over the past three months, an average of less than 65,000 shares changed hands per day, and there were nearly 100,000 shares traded today on a day when all of the major indices were down.

In short, it doesn't take a lot of extra volatility to move shares of a thinly traded small-cap stock like Ameresco by pretty big amounts. Today, for instance, less than a half-million dollars in Ameresco shares traded hands, but because the bulk of those trades started as sell orders, it wiped out more than $20 million in market-cap value.

If you're bullish on the company's prospects going forward, today's market movement shouldn't alter that stance, because nothing materially changed with the company.