All segments saw revenue declines, but exchange rates and energy prices factored heavily into the drops. Despite the top-line struggles, cost savings led to increasing profits. 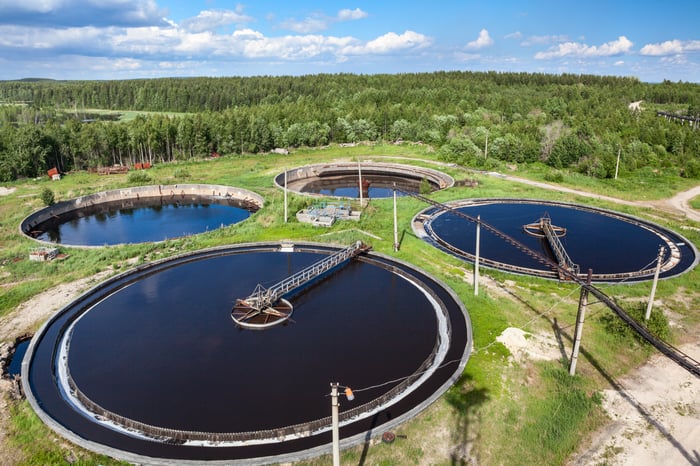 Mr. Market may have sent shares lower after nine-month financial results were released, but environmental services company Veolia Environnement (VEOEY 0.20%) actually posted solid numbers. Factors outside of the company's control have continued to slow its upward trajectory in 2016, but management has responded well by focusing on what it can control. That led to continued investments in projects that will provide long-term growth and strengthen the health of the business.

To avoid confusion, investors should know that Veolia Environnement provides financial updates every three months, but presents metrics on a rolling basis from the starting point of each year. So rather than viewing the company's performance from the three months ended Sept, 30, the numbers for this release present the aggregate performance for the nine months ended Sept. 30.

You can download the press release to view the full financial details, but here are the important metrics for investors to consider compared to the year-ago performance:

In recent years, investors in companies with significant multinational operations have likely become accustomed to the role currency exchange rates play in earnings. Veolia Environnement is no different. In fact, it lists the specific impact of seven foreign currencies in its financial update.

It even goes a step further to calculate the impact of construction activities and energy prices. While I encourage investors to focus on the actual results -- all other companies and individuals have to live in a messy, globalized world, after all -- I've included a column at the end of the table above to demonstrate the currency impact on financial results in 2016.

That said, despite declining revenue, cost-cutting measures have allowed the company to increase profits in 2016. The initiatives allowed Veolia Environnement to save $192.5 million during the first nine months of this year, which is ahead of schedule. Management originally expected to save at least $220 million for the full year, but increased the target to a range of $242 million to $264 million. While a few tens of millions won't have a significant impact on 2016 profits, these savings (as reported) appear dollar for dollar as an increase in EBITDA.

Investors will also find that each one of Veolia Environnement's three segments -- water, waste, and energy -- has witnessed a revenue decline for the first nine months of 2016 compared to the same period last year. Predictably, the energy segment has struggled the most (revenue decline of 3.7%), followed by water (decline of 3.2%), and waste (decline of 2.8%).

However, zooming out highlights a more positive long-term trend. The company has a healthy global backlog in both municipal and industrial markets across its three business segments. Many contracts, either new or renewals, total less than $100 million, but North America and China are driving significant activity. That includes over $715 million in municipal contracts in North America and an enormous $3.6 billion industrial wastewater order from Sinopec in China. Better yet, investors should expect increased industrial activity in the North American market if energy prices begin to climb in the coming years.

Veolia Environnement currently provides full-year 2016 objectives and financial targets for 2018. Here are the latest numbers for the company's outlook:

As you can see, despite near-term choppiness, the company is targeting near-term and long-term growth. Veolia Environnement is also hoping to achieve 10% dividend growth per year between 2016 and 2018, which would actually result in a lower payout ratio (providing more cash for investments and growth). That should be music to the ears of investors, who currently enjoy a dividend yield of about 4%.

Any company with significant global operations will be at the mercy of currency markets. That has hurt more than usual in recent years due to a host of factors, including volatile energy prices and near-stagnant economic growth in certain countries. Yet Veolia Environnement has continued to manage the factors within its control to push through the headwinds and post earnings growth.

If management can maintain a steady hand, then favorable trends in aging American infrastructure and continued investments in industrial projects in China bode well for the long-term health of the business.