American Water Works (AWK -0.80%) confirmed on Friday that it has bid on the regulated water and wastewater systems owned by JEA, the Jacksonville, Florida-owned utility that provides electric, water, and wastewater services to portions of four counties in the northeast part of the Sunshine State.

"Jacksonville is a unique and special community, and JEA has an incredible history of customer service and community development," American Water spokesperson Herbie Thiele was quoted by the Florida Times-Union as saying. "We look forward to the opportunity to contribute our expertise in water and wastewater, which will benefit JEA's customers, employees and the communities it serves."

Here's what investors in the country's largest publicly traded water and wastewater utility company should know. 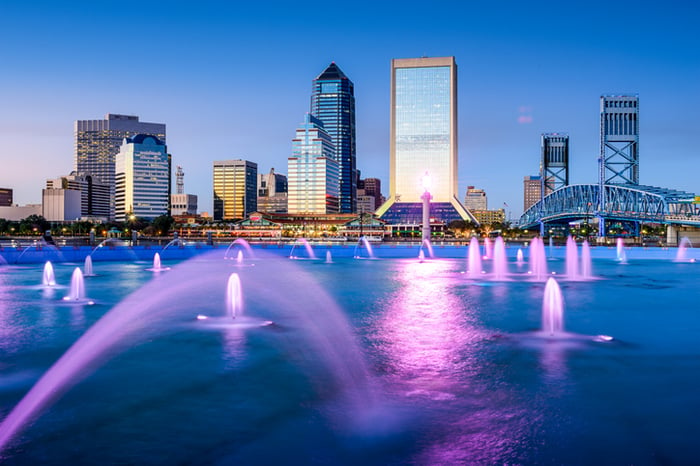 How big are JEA's water and wastewater systems?

JEA is huge, so this would be a big acquisition for American Water. Here are some stats from JEA's Invitation to Negotiate:

For context, in 2018, American Water took in revenue of $3.44 billion. So JEA's water and wastewater revenue is 12.6% of American Water's revenue. Moreover, that percentage should steadily grow, as the Jacksonville area's population is increasing considerably faster than the overall U.S. population, and that dynamic is projected to continue. In 2018, Jacksonville had the seventh largest population percentage gain among U.S. cities. 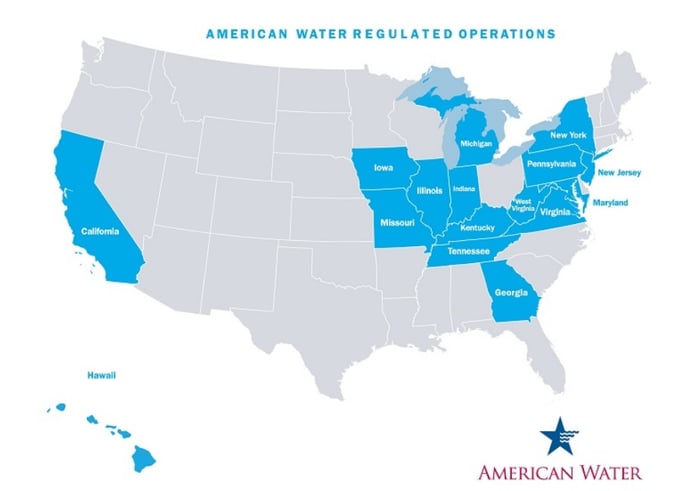 New Jersey-based American Water provides regulated and market-based water, wastewater, and other related services to more than 14 million people in 46 states and one Canadian province. It has regulated operations in 16 states, which are shown in the preceding map. We'll be able to up that number to 17 states if the company acquires JEA's water and/or wastewater systems.

That said, this wouldn't be American Water's first rodeo in Florida, so to speak. As part of a joint venture, the company operates the Tampa Bay Seawater Desalination Plant. At the time it was completed in 2009, this plant, which can process 25 million gallons of water a day, was the largest desalination plant in North America. (American Water is in the process of building a desalination plant in Monterey, California.) Moreover, the company also has a customer call center in Pensacola, in the Florida panhandle, and partnered with the Orlando Utilities Commission to offer warranty programs, according to the Florida Times-Union.

JEA announced this week that it received 16 bids, but it didn't disclose the names of the bidders. Five companies have revealed that they've submitted a bid -- American Water and France-based global water treatment and waste management company Veolia Environnement (VEOEY 2.56%) on the water side, and three companies on the electric side, according to reports by various local news outlets.

On Monday, Oct. 14, JEA will reportedly announce the companies that have made the cut to proceed to the negotiation stage. Given that American Water is the largest water and wastewater utility in the U.S., has a good reputation, and already has a notable presence in Florida, it has to be considered the favorite in this competition even though all of the competitors may not be known. 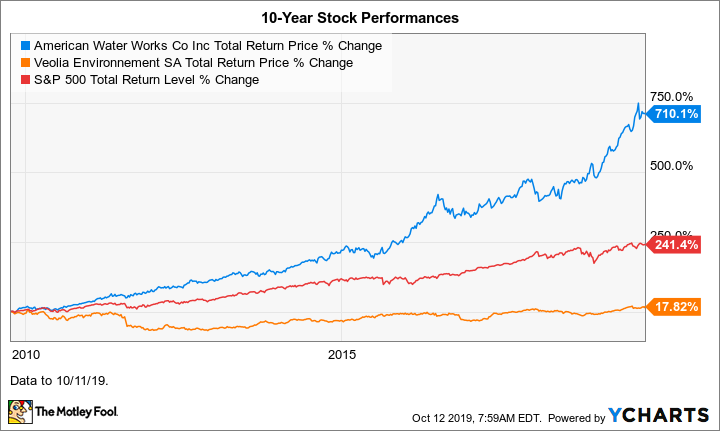 What about Veolia? While money talks -- and we're not privy to the bid amounts -- the company can probably say au revoir to JEA, in my opinion. Folks in the Jacksonville area probably won't take well to having city officials accept the bid of a company that was involved in any way with the Flint, Michigan, water contamination crisis that exploded into the news in 2016. (The Michigan Attorney General filed a civil lawsuit against Veolia, charging it with negligence, fraud, and public nuisance. Veolia, which Flint hired to consult on water quality, has denied any wrongdoing and blames the city.)

Moreover, here's another reason to consider Veolia a long shot: The company's stock performance over the past decade has been dismal, as the preceding chart shows, suggesting a subpar business strategy and/or management execution.

American Water seems to have an excellent chance of being the successful suitor if JEA decides to sell its water and/or wastewater systems. If that occurs, investors can bet that American Water will eventually expand its regulated presence in the Sunshine State.