Shares of Level 3 Communications (NYSE: LVLT) rose 21.1% in October, according to data from S&P Global Market Intelligence. The telecommunications veteran is being acquired by sector rival CenturyLink (NYSE:CTL), and the deal includes a generous buyout premium.

The CenturyLink boost arrived in two stages. First, two days' worth of buyout rumors boosted Level 3's share prices by a total of 15%. When the other shoe dropped and CenturyLink presented a firm cash-plus-shares offer that adds up to roughly $34 billion, the stock added another 5% to the jump.

At the same time, CenturyLink shares rose nearly 10% when the deal was just a rumor -- but it paid all of that back when the final news arrived. 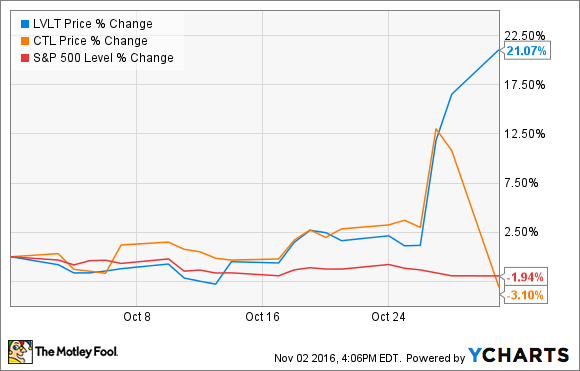 "In addition to the substantial value delivered to shareholders, the combined company will be uniquely positioned to meet the evolving and global needs of enterprise customers," said Level 3 CEO Jeff Storey in a prepared statement.

The final price tag is roughly $66.50 per Level 3 share, depending on the performance of CenturyLink's own stock. Only 40% of the financing comes from cash and new debt, with the rest arriving in the form of freshly printed CenturyLink shares. The total buyout premium was said to be 42%, compared with the day before the rumor mill started making merger noises.

And it is indeed a merger of equals, with current CenturyLink shareholders slated to own 51% of the combined company versus Level 3 owners' 49% stake. The deal is expected to close in the third quarter of 2017, subject to the usual battery of regulatory and shareholder approvals.

Level 3's global data network does look like a good fit for CenturyLink's newfound love of enterprise data customers. Ultimately, this business combination is all about building economies of scale.