Shares of Italian-American automaker Fiat Chrysler Automobiles N.V. (NYSE:FCAU) surged in October. After closing at just $6.40 on the last day of September, shares surged to $7.32 at the end of the day on Oct. 31 -- a gain of almost 14.4% for the month.

As we can see from this chart, the shares really started to climb on Oct. 25, when FCA reported its third-quarter earnings result. 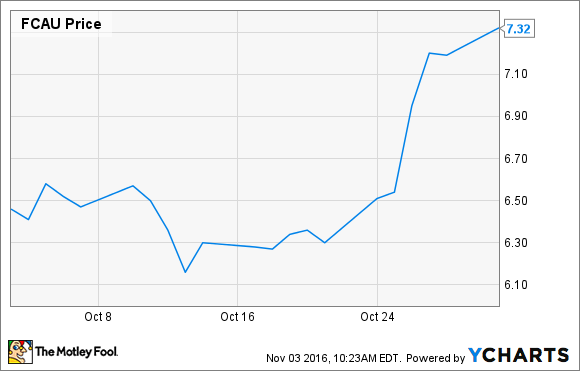 FCA's stock is still a riskier bet than many of its global rivals. The company had a sobering 25.3 billion euros of debt as of Sept. 30, its ambitious five-year product-overhaul plan is behind schedule, and FCA appears to lag the industry in the development and adoption of advanced technology.

But if it can sustain this recent progress amid signs that the U.S. new-car market is softening, the investors who jumped in after its earnings report could be rewarded.