Clean Energy Fuels investors may have gotten a shock when they looked at their portfolios today. Image source: Getty Images.

Shares of Clean Energy Fuels Corp. (NASDAQ:CLNE) were down 15% at 1:50 p.m. EDT on Friday, following the release of the natural gas fueling station operator's third-quarter financial results after the close Thursday. 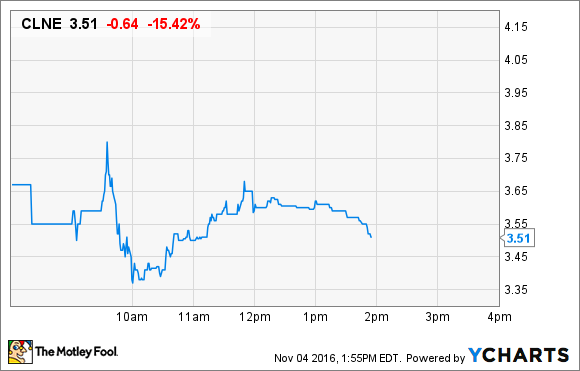 It looks like a few things are driving Clean Energy Fuels' share price down. First, it reported revenue of $97 million and a net loss of $0.10 per share,  missing Wall Street analysts' estimates of $102.7 million in sales and a loss of $0.09 per share.

Additionally, the net loss broke Clean Energy Fuels' recent streak of surprise profits, and it's likely that many investors were expecting the company to continue beating expectations on a GAAP basis. That didn't happen, and nearly 4 million shares have traded hands as of this writing, already nearly double an average day's trading volume with several hours left before market close.

While GAAP-basis earnings results are very important, they are not the only -- and likely not even the most important -- metrics by which one can measure a company's performance. This is especially true for a company like Clean Energy Fuels, which benefits from very large depreciation and amortization expenses, which are non-cash and tied to prior capital spending.

On a cash basis, its operating results were much better than the GAAP numbers would indicate. Simply adjusting for the non-cash $14.8 million depreciation and amortization expense alone would shift the company from a $5.5 million operating loss to a $9.3 million operating profit in the quarter. Subtract $6.3 million in interest expenses from that total, and you're left with approximately $3 million positive result -- far better than the GAAP loss makes it appear.

Furthermore, Clean Energy Fuels ended the quarter owing $136 million less than it did at the start of the quarter, having paid down all of its debt expiring in 2016 with a combination of cash and stock. The company also ended the quarter with nearly $182 million in cash and short-term investments, and only $4.8 million in debt due between now and mid-2018.

Put it all together, and the market seems to be voting today based on an incomplete understanding of Clean Energy Fuels' financial and operating results. The company paid down a significant amount of debt while maintaining a relatively strong cash position -- though at the cost of a pretty hefty degree of shareholder dilution -- while also growing several key customer metrics, including gallons of fuel sold and per-gallon fuel margins.

Bottom line: The company has made major progress in 2016, and this quarter was no exception, despite the GAAP results. It's on track to build more fuel stations this year than it has in any year in its history, and is projecting similar expansion for 2017. The growth story of natural gas as a transportation fuel may have been slow to play out, but Clean Energy Fuels continues to take advantage of that trend while also improving the quality of its financial results.

Stay tuned for a deep dive on the company's results in the days ahead.