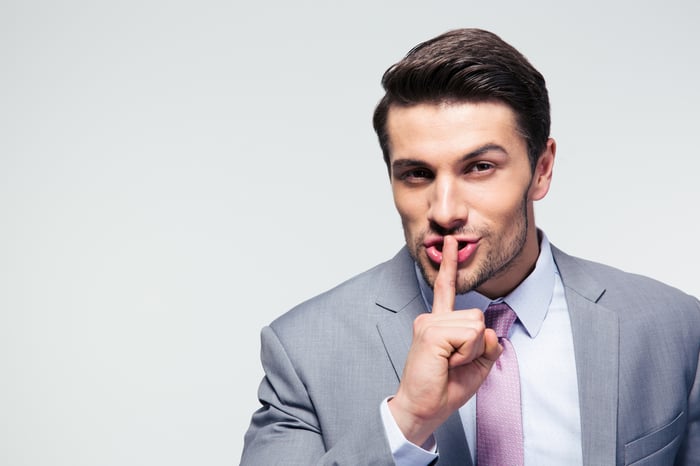 The worst-kept secret in financial media is that most companies want a strong dollar. Image source: Getty Images.

The term, which is taken to mean that the government should attempt to keep the dollar's value high versus foreign currencies, is bandied about financial media as the cure of all economic ills. In truth, there are many economic pitfalls of a strong dollar. In the labor markets, a strong dollar encourages employers to cut domestic inputs (read: jobs) in favor of offshore production. Additionally, a stronger dollar makes it harder for U.S.-based multinationals to sell their products abroad and to convert profits back to U.S. dollars.

King Dollar appears to be another economic "zombie idea" that was once accurate but has outlived its usefulness. During the '60s and '70s, when U.S.-based companies were importing inputs (especially oil) but not selling as much product abroad, a strong dollar would be of obvious benefit. Wall Street talking heads tend to skew older, and it appears many have not updated their outlook on business to account for the new economy, where oil costs have been mitigated by domestic energy production and the rise of American multinational corporations.

One such multinational company, Procter & Gamble (NYSE:PG), is caught in the crosshairs of a strengthening U.S. dollar. In an interview with CNBC, P&G CEO David Taylor noted that the company lost approximately $1 billion in pre-tax earnings because of negative currency effects in each of the past four years. If the Federal Reserve, led by Janet Yellen, decides to rapidly "normalize" interest rates (whatever that means), it could be the biggest short-term risk Procter & Gamble faces.

It is widely expected that the Federal Reserve will raise rates at its December meeting, with a Wall Street Journal (subscription required) survey of economists finding that 81.4% felt the Fed would raise rates then. If the Fed goes through with the increase, money would flow into the United States to take advantage of higher rates, all other factors equal, which would increase the relative value of the dollar versus other currencies.

For example, last year P&G noted that 23% of all sales were in Europe. In the past six months, the two largest currencies in the euro region, the British pound and the euro, have depreciated versus the dollar: The chart shows the dollar exchange rate over the past six months for the euro and the British pound as a direct quote. Simply put, this is the amount of dollars it would take to equal one unit of euro and pound. As such, a decrease in the line on the chart signifies a strengthening of the dollar, which hurts P&G. While the euro has been mostly stable during the past six months, the pound has been, well, pounded, as concerns about Brexit have weighed on the currency.

An increase in interest rates will exacerbate the dollar's strengthening versus these currencies. Even worse, a premature rush to "normalization" while other central banks continue to keep interest rates low could be the biggest risk to P&G and its stable of price-sensitive, commodity-like products in the short term.

My suspicion is the "King Dollar" crowd is less concerned with the exchange rate and more interested in the rate increase. The biggest beneficiary of an increase in interest rates is not necessarily individual savers, who have mostly already chosen higher-yielding investments, but rather Wall Street banks that would immediately benefit from the net interest spread. This is especially true if they don't pass along the increased rates to their depositors, as they did the last time the Federal Reserve raised rates.

To date, Yellen's Fed hasn't given in to incessant demands from financial media to rapidly "normalize" rates; P&G should hope that situation continues.