Please ensure Javascript is enabled for purposes of website accessibility
Log In Help Join The Motley Fool
Free Article Join Over 1 Million Premium Members And Get More In-Depth Stock Guidance and Research
By Evan Niu, CFA - Updated Nov 8, 2016 at 11:30AM

Is it just a matter of time before the social network eats an impairment?

Did Facebook overpay for WhatsApp? Only time will tell. Image source: WhatsApp.

It's been years, and I still can't wrap my head around the price tag. Facebook (META -1.01%) shocked investors in 2014 when it announced the massive $19 billion acquisition of WhatsApp, a price tag that ended up increasing to about $22 billion by the time the deal closed, since the deal consisted mostly of stock. I never questioned the strategic validity of the deal, just the financial pragmatism of paying such a massive amount of money for the growing messaging service. As a Facebook shareholder myself, I can't help but feel anxious every time I look at the balance sheet. That goodwill line item is just enormous.

The vast majority of Facebook's current carrying value for goodwill and net intangible assets comes directly from WhatsApp, since the acquisition price was so far above the book value of acquired assets. Specifically, the social network accounted for $15.3 billion worth of goodwill after the deal closed in 2014. 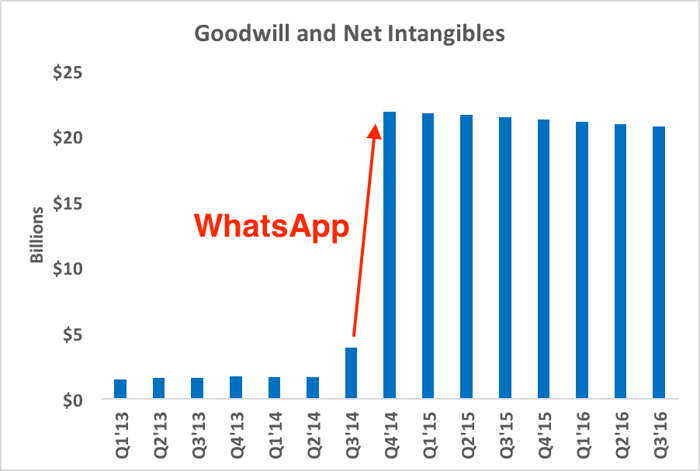 Here is where it derived that value: "Goodwill generated from the WhatsApp acquisition is primarily attributable to expected synergies from future growth, from potential monetization opportunities, from strategic advantages provided in the mobile ecosystem, and from expansion of our mobile messaging offerings."

Immediately after closing, goodwill and net intangibles represented over half of total assets. This percentage has come down since and is now around a third, as Facebook's business has grown, adding cash and infrastructure to the balance sheet.

Companies must test for goodwill impairments at least once per year. If the fair value is deemed to be less than the carrying value, then the company must eat an impairment and incur the hit on the income statement. As we approach the end of 2016, it's possible that Facebook is conducting these tests as we speak. No impairments were identified last year. However, it's still too early to tell if Facebook overpaid for WhatsApp, and I wouldn't expect an impairment in the near future.

Remember that Facebook said it would start thinking seriously about monetizing WhatsApp once the service reached 1 billion users, which only occurred in February of this year. Interestingly enough, that announcement came just weeks after WhatsApp eliminated its subscription fee, which was previously $1 per year. Once those users graduated beyond the free trial to paying customers, that would have been $1 billion in revenue per year. You'd think that would hurt WhatsApp monetization, and therefore negatively affect the goodwill valuation, but again, Facebook has a long time horizon for WhatsApp.

When WhatsApp ditched the fee, it made it clear that third-party ads were not the alternative monetization method. It would take the same approach that Facebook Messenger is taking: connecting businesses with consumers to help facilitate communications and customer service requests. There's potentially a lot more money there, as businesses are willing to pay for those interactions while consumers get a free service. Just a couple months ago, WhatsApp tweaked its service policy to allow businesses to communicate to users, as well as sharing user data with parent company Facebook, in what lays the foundation for future monetization.

While WhatsApp and Messenger appear to be on the same monetization paths, given the similarity of their services, there's a huge difference in the risk profile even if they pursue identical strategies. Facebook built Messenger from scratch, but paid an inordinate amount of money for WhatsApp. If both services pursue some monetization strategy that somehow fails, Messenger's exposure is simply the internal R&D expenses associated with the effort, while WhatsApp's billions of dollars of goodwill are at risk.

To be clear, I don't think that WhatsApp or Messenger will fail. Facebook has demonstrated that it can execute once it puts its mind to something. But WhatsApp can operationally succeed as a profitable business segment and still have been overvalued at the time of acquisition; these two things are not necessarily mutually exclusive. I just can't shake this fear that one day Facebook may realize it paid too much.