WhatsApp better live up to its price tag, or else a painful writedown is in store for investors.

It's been exactly two years now since Facebook (META -0.11%) announced its blockbuster acquisition of WhatsApp for a jaw-dropping $21 billion. The initial price tag was less, but Facebook primarily funded the deal with stock and shares rose by the time the deal closed, increasing the final price tag (although dilution remained unchanged). Facebook gave a rare glimpse of WhatsApp's financials shortly after the deal closed, and has remained silent ever since on how the popular messaging platform was performing.

To be clear, WhatsApp has absolutely fulfilled its goal of reaching 1 billion monthly active users, which was touted as the target before Facebook would seriously start to consider monetization strategies. WhatsApp's user base hit 10 digits earlier this month. But even now, two years later, I'm still struggling to wrap my head around how much Facebook paid.

Happy anniversary?
Two years ago, WhatsApp had 450 million users, so the service has undeniably executed on the user growth front, more than doubling its user base in two short years. After the deal closed in October of that year, Facebook's goodwill and net intangibles sitting on the balance sheet skyrocketed to insane levels, specifically because the social network paid so handsomely.

The carrying value of Facebook's goodwill hasn't changed all that much in the two years since, but that one deal was quite a whopper. 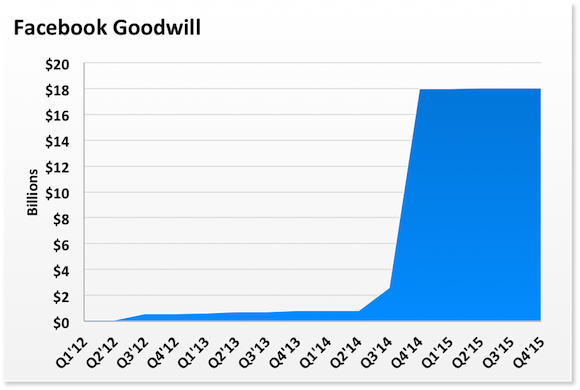 As of last quarter, Facebook had $18 billion of goodwill and $3.2 billion of net intangible assets. That accounts for over 40% of total assets on the balance sheet.

In fact, the goodwill associated with WhatsApp is more than Twitter's (TWTR -0.30%) entire market cap right now. I'm not a Twitter bull by any stretch of the imagination, but at least Twitter has a meaningful revenue base and is able to put up black ink. Well, at least on an adjusted non-GAAP basis.

That rare glimpse of WhatsApp financial results that I mentioned earlier? It showed that trailing-12-month revenue at the time (as of June 2014) was just $22.7 million and WhatsApp posted a net loss of $311.9 million during that timeframe. (You can see WhatsApp's results for 2012 to 2013 and the first half of 2014.) Twitter doesn't even look so bad right about now.

One of these is not like the other
Don't get me wrong. I'm a Facebook shareholder and I'm fully cognizant of what Facebook is capable of once it starts trying. Just look at the company's mobile ad business, which is now a $13 billion business.

But building something from scratch and paying an extraordinary amount of money for something are completely different things. If you build something from scratch and it fails, it is possible to do so cheaply. If you pay an incredible sum for an existing platform that you want to build into a business, then you're setting the bar very high from the get-go. That's a significant risk for shareholders to bear, since if WhatsApp fails to live up to that high bar, we're talking about a commensurately large writedown and impairment charge that Facebook would have to eat.

None of this is to say that Facebook should not have acquired WhatsApp. I've long maintained that the deal made tons of sense strategically considering WhatsApp's popularity in emerging markets, which highly complements Facebook Messenger's popularity in developed markets. WhatsApp has now killed its negligible subscription fee while focusing on new monetization strategies.

Evan Niu, CFA owns shares of Facebook. The Motley Fool owns shares of and recommends Facebook and Twitter. Try any of our Foolish newsletter services free for 30 days. We Fools may not all hold the same opinions, but we all believe that considering a diverse range of insights makes us better investors. The Motley Fool has a disclosure policy.