Facebook records an insane amount of goodwill related to its WhatsApp purchase, which just closed. That's what happens when you pay an insane premium for a startup.

It's not just about what you buy, but also what you pay for it.

When Facebook (META -2.36%) announced its jaw-dropping $19 billion acquisition of WhatsApp earlier this year, virtually no one could make sense of the purchase price for a company with negligible revenue. Sure, the messaging service had 450 million monthly active users, or MAUs, at the time, but solid financial information was shrouded in mystery since WhatsApp was a relatively small start-up.

Well, alongside an impressive earnings release, Facebook has now disclosed all sorts of interesting figures about the massive purchase. Due to the sheer size of the acquisition, Facebook and its shareholders are now exposed to a massive risk just sitting on the balance sheet.

Goodwill hunting
One of the most abstract concepts in all of investing and accounting is none other than goodwill. It represents the premium that an acquirer pays in excess of tangible and physical assets. The value of goodwill is primarily derived from things like brand strength or strong relations with customers and employees, among others.

Companies must annually test goodwill for possible impairment, and if its value is deemed less than what the company is carrying it for, it will have to take a painful impairment charge. To the extent that a company can justify the premium it paid for an acquisition, it should be fairly safe from goodwill impairments down the road.

In the case of Facebook and WhatsApp, the social network recorded an incredible $15.3 billion in goodwill related to the acquisition. Throw in other intangible assets such as the userbase, tradename, and acquired technology, and total goodwill and intangibles associated with this deal was an astounding $18.1 billion. 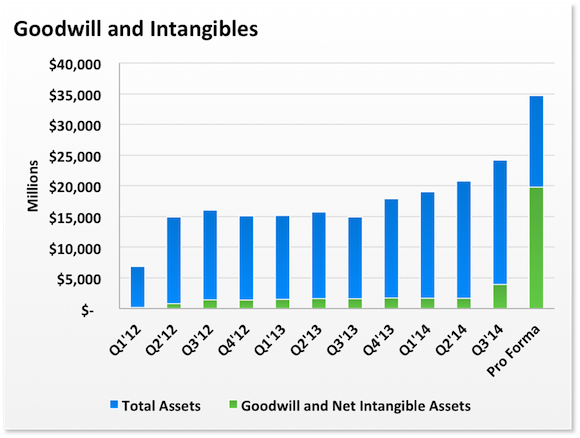 Put another way, these abstract figures now account for over half of Facebook's total assets. 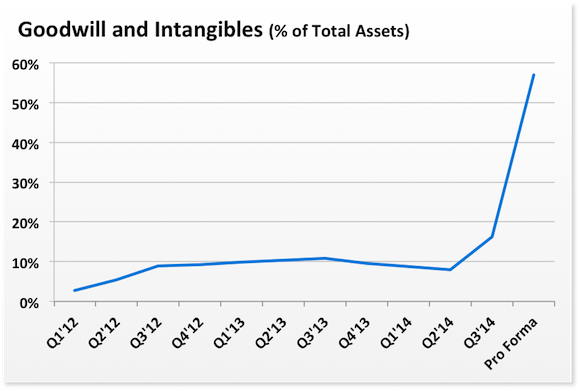 It gets worse. Facebook's pro forma estimates are actually as of June, so they effectively exclude Oculus VR's financials as well. Facebook closed the Oculus purchase in late July, and its figures are reflected in the Q3 balance sheet. Meanwhile, WhatsApp didn't close until October -- after the quarter closed.

That means that Facebook's goodwill and intangibles after accounting for both Oculus and WhatsApp is even higher than shown in the charts above. The Q3 figures don't include the $4.6 billion in cash that Facebook paid out for WhatsApp after the quarter closed, reducing total assets further and increasing the percentage of goodwill and intangibles.

Here's how the company justifies WhatsApp's goodwill: "We believe the amount of goodwill resulting from the allocation of purchase consideration is primarily attributable to expected synergies from future growth, from potential monetization opportunities, from strategic advantages provided in the mobile ecosystem, and from expansion of our mobile messaging offerings."

WhatsApp lost over $232 million in 6 months
It's also worth adding that Facebook's net purchase price has increased since the deal was announced. Since a large portion of the deal was paid for with stock and Facebook stock has been on the rise, the total value is now pegged at $21.8 billion. So how strong is the business that Facebook bought for that hefty sum?

The figures also imply a trailing-12-month revenue base of $22.7 million. That means Facebook paid 960 times sales for WhatsApp (and you thought Facebook itself was expensive at 21 times sales).

WhatsApp is already hurting Facebook's results
The implications of the WhatsApp purchase are already weighing on shareholders. The main reason why Facebook shares fell 6% after earnings is because of concerns around rising costs. While it's entirely reasonable for Facebook to be investing heavily in future revenue growth, the costs specifically related to WhatsApp are hard to justify since they're directly tied to the insane premium that Facebook paid.

For example, Facebook's outlook for 2014 expenses is now expected to increase between 45% to 50% from 2013 levels, up from its prior guidance of a 30% to 35% increase. This difference is primarily attributable to an increase in stock-based compensation for the WhatsApp acquisition. Since Facebook issued nearly 178 million shares to pay for the deal, it should close out the year with 2.8 billion shares. That will inevitably result in significant earnings dilution for existing shareholders in the fourth quarter.

More pain in store?
Strategically, WhatsApp makes a lot of sense. The service is highly complementary to Facebook Messenger due to its popularity in emerging markets, and truly represents a potentially disruptive force in telecommunications by undermining antiquated SMS infrastructure and business models. Financially, the price is still hard to fathom.

This is the biggest difference between WhatsApp and any of Facebook's other notable purchases. Facebook spent less than $1 billion on Instagram, which is now shaping up to be an incredible ad platform thanks to soaring engagement (users spend 21 minutes per day on Instagram on average). Even Oculus VR has a lot of potential at $2 billion, even if it still sounds like the stuff of science fiction.

Even after 8 months, I still can't make sense of WhatsApp's numbers. Facebook has set a very high bar for itself in making this deal work out, and if the order proves too tall to fill, over half of its assets are now exposed to possible impairment risk.