And that's a prime indicator of how poorly it's executing.

There was a nice nugget of information in Twitter's (TWTR 1.19%) third-quarter letter to shareholders. "Each day there are millions of people that come to Twitter to sign up for a new account or reactivate an existing account that has not been active in the last 30 days," management wrote.

On the company's earnings call, CFO Anthony Noto expounded on that number, saying Twitter has 420 million unique active accounts on a quarterly basis and 700 million on an annual basis.

While management says those numbers represent a significant opportunity to grow its user base, it looks more like a failure. The millions that log into Twitter or sign up for new accounts every day highlight Twitter's trouble retaining users.

Twitter reported an average of 317 million monthly active users for the third quarter. That implies that it failed to retain  around 100 million active users during the quarter based on Noto's comments. With 700 million users signing up for new accounts, reactivating old accounts, or using Twitter as normal over the past year, Twitter is retaining as monthly users less than half of the people bothering to log into or create an account. 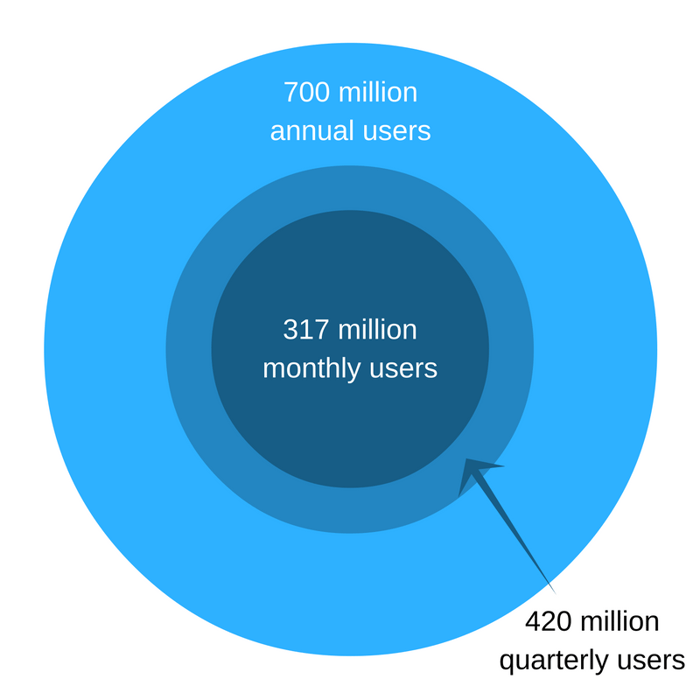 What's more, the "millions of people" comment in the letter to shareholders implies Twitter counts at least 60 million people every month that are either new or reactivating accounts as active users every month. (That's using the minimum definition of "millions," i.e. 2 million) So about 20% of its monthly active user base are these types of accounts with little to no user data. Without a good amount of user data, Twitter's ad targeting suffers and ad prices fail to grow.

Over the past quarter, Twitter added just 4 million net accounts. It doesn't provide data on user churn, but it's clear that a lot of users aren't sticking around very long. There's a 103 million-user drop from its quarterly number to its monthly number, implying that new people aren't sticking around for more than a month or, worse, it's losing lots of established users.

In the letter to shareholders, management noted that it's working on refining the core of Twitter to drive better results. Specifically, that entails reworking the onboarding process, improving the home timeline, increasing notifications and making them more relevant, and making tweeting easier. All four ought to have an impact on its ability to retain users.

The company switched to an interest-based onboarding system, so new users can quickly find the content on Twitter most interesting to them. When it experimented earlier this year, it found a 30% increase in new follows and mutual follows, as well as an increase in time spent on Twitter.

Twitter changed to an algorithmically sorted timeline during the first quarter of the year, switching from a reverse-chronological timeline. Management says the change resulted in improved retention and engagement last quarter. It also noted that increased notifications generated by its machine-learning algorithms drove greater retention.

Even with Twitter's efforts to improve retention, the numbers show a different story. After all, a 30% increase isn't that much if the base is extremely small. While Twitter seems to be planning all the right things, its execution is lacking.

Twitter recently started investing heavily in live broadcasting of events such as NFL games and the presidential debates. Management had a lot to say about the audience those broadcasts drew to Twitter. In particular, management noted that lighter users engaged more with the video streams than medium and heavy users did.

It also presented the broadcasts as an opportunity to attract a broader audience to Twitter. But Twitter's missing out on the bigger opportunity if it's unable to retain those users who are coming to Twitter just to stream a live event.

Twitter might have millions of people coming to its website or app every day, but unless it's able to develop a strong profile of its users, its advertising targeting will never reach the levels of its competitors. What's more, brand advertisers may be hesitant to spend money on a campaign if most users are unlikely to see their message more than a couple of times.

We've seen the impact of Twitter's retention problem on its user growth for several quarters, and now we're starting to see it show up in its advertising revenue growth. Unless Twitter can execute on its refine-the-core plan, it's not going to get better. Unfortunately, it hasn't shown itself capable of doing so.