Considering the number of bankruptcies to hit the coal industry over the past few years, there's a certain irony in the crazy rally that has seen coal prices triple in 2016. Yet despite the meteoric rise, the industry is still ailing, and moves by one heavy equipment maker even suggest it may have a terminal condition. 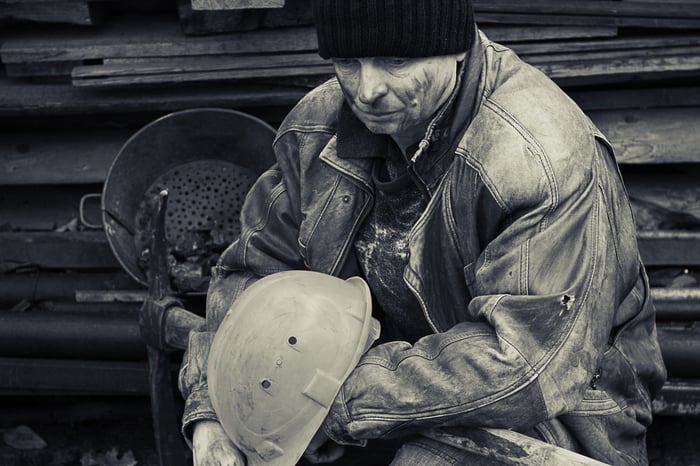 Despite the rally in prices this year, the outlook for the coal mining industry remains bleak. Image source: Getty Images.

China, the linchpin as always

There's been something of a hidden campaign by China to prop up its coal industry. Goldman Sachs analysts say it has imposed production restrictions as a means of effecting a "stealth" bailout of the industry and its creditors, who might otherwise be jeopardized if the coal companies couldn't service their debt. By limiting production, it's helped drive the price of coal higher, and it sees the "bailout" lasting until at least 2020.

Bloomberg Markets says China's coal production tumbled after the government ordered miners to reduce output to the equivalent of 276 days of production, down from the previous level of 330 days. It notes that output fell 10.5% through September.

Prices have soared in response. Seaborne prices for thermal coal are running around $97 per tonne, while metallurgical coal has surged to around $250 per tonne, some three times higher than what it went for a year ago.

In addition to mine closures, new trucking regulations have created delivery backlogs that have caused transportation prices to rise accordingly.

Still, the rally has allowed Beijing to relax some of its restrictions to help meet winter demand while also encouraging mines currently under construction to complete their work and begin production.

The price surge isn't expected to see other miners jump-start currently idled projects. Teck Resources (NYSE:TECK), the largest product of met coal in North America, said on its third-quarter earnings conference call that although conditions could see prices remain elevated, this was not some "new normal" for coal. CEO Don Lindsay said on the call, "The management teams will typically not make any significant investment decisions based on a few weeks of prices."

That could be why one heavy equipment maker figures now is the time to get out of supplying the coal mining industry with its specialized equipment. Delivering its own quarterly earnings report last week, Caterpillar (NYSE:CAT) reiterated that as part of the major restructuring and consolidation of its operations it has been engineering over the past year, it was looking to sell its room and pillar equipment.

While Caterpillar may want to sell off its room and pillar mining equipment, there may be others willing to sell into the industry. Image source: Joy Global.

A strategic exit from the market

Room and pillar mining is fairly unique to the coal industry and is the process by which material is extracted in horizontal sections, the "rooms," that leave a series of columns, or "pillars" holding up the structure.

While also used in iron and copper mining, it is especially prevalent in the U.S. Appalachian coal industry, and Caterpillar's decision to exit the market -- it also says it's contemplating just shutting down the manufacturing facility -- indicates it believes there's little room for profitable growth here.

Caterpillar first announced its intent to pursue strategic alternative for the division back in August, saying divesting the business "will allow us to focus resources on those areas of the business that provide the highest sustainable growth and best long-term returns." It's also stopped taking orders for new equipment.

The heavy equipment maker says it still sees mining "as an attractive long-term industry," both above and underground, but it's obviously prioritizing which industries are best. Shedding the room and pillar business means coal mining is not one of them.

Arch Coal may have risen from the ashes of bankruptcy to trade once more on the New York Stock Exchange and, unburdened by its massive debt, may be able to operate more efficiently than it did previously, but the coal industry is on the decline, and Caterpillar's decision may see its end coming sooner rather than later.