Shares of the maker of anti-obesity drugs Arena Pharmaceuticals (NASDAQ:ARNA) fell by more than 19% in October, according to data from S&P Global Market Intelligence. 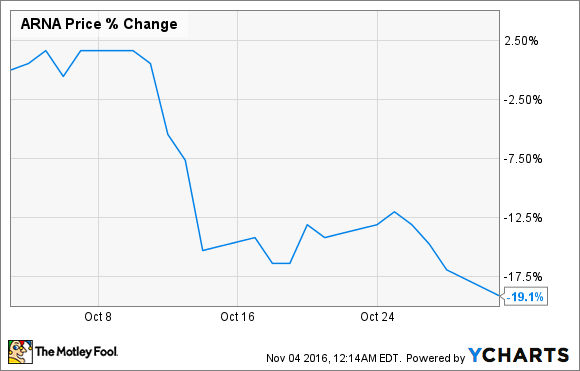 Arena's nosedive last month was apparently triggered by a marketwide downturn among biotechs of all sizes -- presumably resulting from the uncertainty created by the upcoming U.S. presidential election. After all, Arena didn't announce any clinical, regulatory, or commercial setbacks.

To the contrary, Arena and its marketing partner Eisai Co. (OTC:ESALY) actually unveiled the highly anticipated, once-daily dosing formulation of their FDA-approved weight-loss drug Belviq at the start of the month. This more user-friendly version of the drug is dubbed Belviq XR.

Arena's shares simply can't catch a break and are now down by nearly 90% from their former highs prior to Belviq's approval. The shorthand version of the story is that Belviq's commercialization has been a failure, forcing Arena to double down on its clinical activities to create shareholder value.

The weakness of the market for prescription weight-loss drugs defied the expectations of many shareholders. However, there were clear warnings signs that Belviq -- along with the other anti-obesity medications approved by the FDA a few years back -- would flop commercially.

First off, payers simply didn't get on board with these drugs for the most part, as a result of their modest efficacy and questionable safety profiles. And as that particular headwind remains very much in play today, there's no really good reason to think that a new formulation will change Belviq's flagging commercial trajectory.

More likely, investors should probably brace themselves for Eisai finally deciding to pull the plug on its partnership with Arena. The Japanese drugmaker, after all, has been steadily pulling resources away from Belviq's promotion, perhaps indicating a lack of confidence in its ability to ever turn the corner.

Now, that's not to say that Arena itself is dead in the water. Arena does have some intriguing early- to mid-stage drug candidates in the works that may one day change the biotech's fortunes. But Arena's untenable relationship with Eisai seems to be nearing its expiration date.