Buffalo Wild Wings (NASDAQ:BWLD) reported earnings on Oct. 26. In what has become a difficult and competitive restaurant environment, business performance and management's updated outlook were mixed but largely met with satisfaction from shareholders, who pushed the stock up 6% the next day. Let's look at the bad news, the good news, and what's next.

The bad news from the third quarter

Comparable-restaurant sales declined 1.8% at company-owned locations and declined 1.6% at franchised locations during the quarter. This is now the third quarter in a row the company has reported a year-over-year decrease in comps after solid growth in the metric during the prior year.

Management also downgraded its profitability outlook for the full year 2016. Guidance before the report was that earnings would come in between $5.65 and $5.85. The estimate now is that full-year earnings will come in "slightly below" the $5.65 mark.

In spite of the bad news, investors are reacting positively. Shares have risen since earnings were reported, though they are still well below the all-time high of $205 a share reached last September. 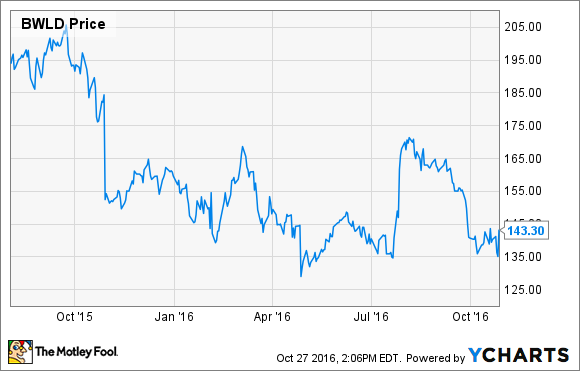 The good news from the third quarter

In spite of declining same-restaurant sales, the company still saw robust top- and bottom-line growth. Revenue increased 8.5% to $494.2 million, and earnings per share increased 23% to $1.23. Revenue and profit were driven higher primarily by 40 more locations in operation than the same time last year.

Even though full-year profit expectations were downgraded to just under $5.65 per share, that would still represent as much as a 13% increase using last year's earnings per share of $4.97.

Year-to-date profits are at $4.24. Assuming full-year guidance of slightly under $5.65, fourth-quarter results should be in the ballpark of $1.40, a 6% increase over the fourth quarter last year.

Also positive were the company's initial development plans for 2017. Management sees as many as 50 new locations being opened in the U.S. and 25 internationally next year. It closed the quarter with about 1,200 locations. The sports hangout is also forging ahead with its new R Taco fast-casual concept and sees as many as 15 opening their doors in the year ahead. It ended the quarter with 14.

What's next for B-Dubs

The chain continues to reiterate its new goal of targeting 15%-per-year average profitability increases going forward. Returning to positive comparable sales will be key in accomplishing that goal.

To that end, a few initiatives have been launched over the past few months. Take-out orders have been promoted, and through the third quarter take-out now represents 16% of restaurant sales. A 15-minute guarantee on lunch orders was also put into place over the summer.

Newer plans include half-price wing Tuesdays, B-Dubs Blazin' Rewards for frequent diners, and a pilot program for delivery service. All of the new sales ideas have helped generate positive traffic growth at participating locations so far.

On the road immediately ahead is a new fall menu being launched in November and Buffalo Wild Wings' continued support of e-sports. The company is looking at viewership trends among the younger crowd, and video game spectating as a sport has been targeted. The company has made Eleague sponsorships and has also partnered with Titanfall 2 maker Electronic Arts for players of the new game to receive special game content when they visit their local B-Dubs during November.

As the company transitions from a period of high growth to one of returning profits to shareholders and unlocking new value in the existing business, this last report was a good one despite a few areas of concern.