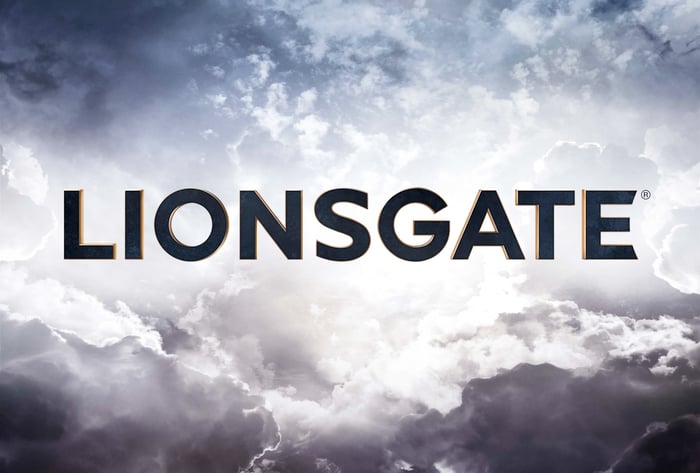 Shares of Lions Gate Entertainment (NYSE:LGF-A) have lost roughly half their value over the past year, providing occasion to look at what the future might hold for the entertainment producer and whether it's a good time to invest in the company.

Its film slate has been underperforming, and the company recently axed its dividend, but a bigger push into television and potential benefits of scale stemming from its pending acquisition of Starz could make the media house a long-term winner. Let's look at what's going on with the company and consider whether now is a good time to buy Lions Gate.

Lions Gate is trading at its lowest price in three years. However, the company's share price is still up nearly 150% over a five-year period. Putting Lions Gate's big swings over the past five years in context, the company's share price underwent a tremendous rise thanks to the success of early entries in the Hunger Games series, but the lack of an apparent major franchise successor and disappointing performance for many of its recent releases have complicated the company's outlook. Ticket sales for Allegiant, the most recent installment in the Divergent series, were bad enough that the series will now be wrapped up with a TV movie and a recent attempt to reintroduce the Blair Witch horror property also came up short.

With a market cap of under $3 billion before its announced merger with Starz, Lions Gate is prone to big swings based on the performance of its key film and television properties. How the stock fares going forward largely hinges on an ability to produce hit entertainment properties and take advantage of new distribution channels and international growth, as well as to what extent its integration of Starz proves fruitful.

The company trades at roughly 25 times forward earnings estimates, a valuation that reflects recent disappointments from the company's film releases and leaves room for upside given the company's growth potential. Taking a long-term vantage point, I expect that the business will be able to ride favorable trends in the entertainment industry that will pave the way for substantial appreciation from its current price. Still, investors buying the stock should be aware that there could be significant pitfalls along the way -- likely to be tied to the performance of key theatrical releases.

The new Lions Gate will be more TV-centric

In its last fiscal year, Lions Gate recorded $2.35 billion in revenue, with $1.68 billion in sales from its motion picture segment and $670 million from its television business. With the film wing in a rough patch, the company is counting on its television business to carry more weight. The company has already been making progress on that front, with its 2015 fiscal year posting its best-ever television revenue and its $4.4 billion acquisition of Starz positioning the new Lions Gate to be much more focused on TV.

The company anticipates spending $1.8 billion a year in original content production, with $1 billion dedicated to TV production and the remainder going to film. The stock probably has significant room to run if Lions Gate can continue to build in television and deliver hits such as its Netflix series Orange Is the New Black, but as with franchise films, true breakouts are somewhat unpredictable and difficult to produce.

The acquisition of Starz brings a substantial range of studios and television assets under the Lions Gate banner and should create beneficial synergies if managed correctly. While Starz has had its own struggles generating hit content over the years, it has recently evidenced positive content momentum with successful series, including Outlander and Ash vs. Evil Dead. It's tough to predict how exactly the merger will play out, but in theory, the combined company should be able to realize scale advantages, including reduced costs and wider distribution opportunities to produce favorable results over the long term.

The broader movie industry has momentum thanks to growth in foreign markets and digital distribution platforms, but these positive trends are counterbalanced by not having much in the announced film slate that points to surefire blockbuster franchise potential. In terms of franchise generators, Lions Gate's biggest film due for release in the next year is Power Rangers. The movie is set for a March opening and could benefit from nostalgia for the well-known property.

Further down the line and with a release not yet announced, its adaptation of the The Kingkiller Chronicle looks to be another key franchise and a return to the realm of literary adaptations, which have previously yielded big hits for Lions Gate. The company is also developing a television series based on the property. As a caveat, the Kingkiller book property doesn't have comparable popularity to the Twilight or Hunger Games series, so expecting similar performance might not be realistic.

CEO Jon Feltheimer has indicated that the company doesn't need to conform to the franchise-dependent model to find success, but much of the stock's gains over the last five-year period are tied to its big theatrical releases, so investors should still closely monitor how it fares on that front. The company is also emphasizing the benefits of low production costs, which could be prudent in light of a broader trend of big-budget misfires at the box office and an expanding market for mid-budget pictures through digital channels. However, indications that the company is pulling back on franchise film production without strong progress from its TV segment would be cause for reappraisal of a positive investment thesis on the company.

Overall, Lions Gate looks like a worthwhile portfolio addition. Its current valuation appears to offer upside even though a strict price-to-earnings assessment suggests that the stock is expensive relative to Disney or Time Warner, which both trade at roughly 16 times forward earnings estimates. Lions Gate stock has a forward P/E of about 40.  Investing in the stock should be thought of as more risky than an investment in its larger industry peers, but Lions Gate has more room to run, and long-term investors could see big upside that justifies the added risk.