Toyota is selling a lot of RAV4s in the U.S. But sales have been limited by tight supplies, and that represents a lost profit opportunity as Toyota's sedan sales lag. Image source: Toyota.

Toyota Motor Corporation (NYSE:TM) said on Nov. 8 that its operating profit fell 43% in the quarter ended Sept. 30, as exchange-rate pressures and headwinds in the important U.S. market resulted in an 8.8% year-over-year drop in revenue.

Toyota's operating profit of 474.6 billion yen ($4.55 billion) fell slightly short of the consensus estimate of 476.26 billion yen from analysts polled by Thomson Reuters. But despite the profit decline, Toyota raised its full-year profit forecast, as the increase in value of the Japanese yen stopped short of the levels it had predicted earlier.

Toyota's American depositary receipts were up slightly in early trading in New York after the news was released.

Like many Japanese companies, Toyota begins its fiscal year on April 1. The quarter that ended on Sept. 30 was the second quarter of Toyota's 2017 fiscal year. 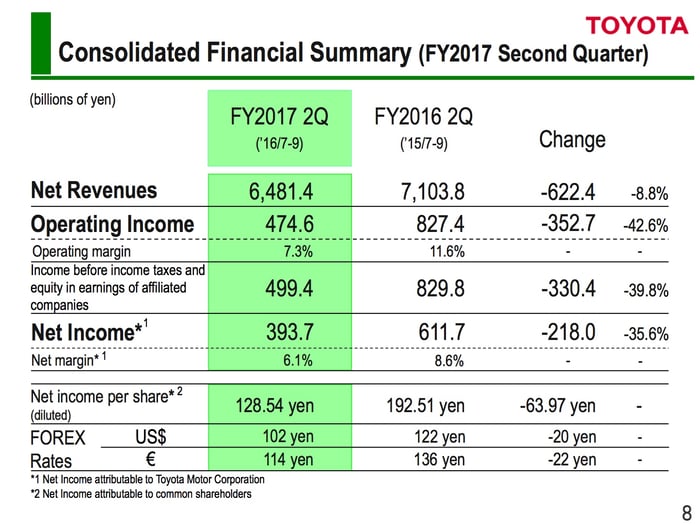 What happened at Toyota during the quarter

Toyota's year-over-year drop in operating profit is largely explained by one factor: The value of the Japanese yen has been rising relative to the euro and the U.S. dollar. The dollars that Toyota earns in the U.S. are each worth 20 fewer yen than they were a year ago; because Toyota reports its financial results in yen, that hurts.

Exchange rates alone had a 330-billion-yen impact on Toyota's operating profit versus its year-ago result. 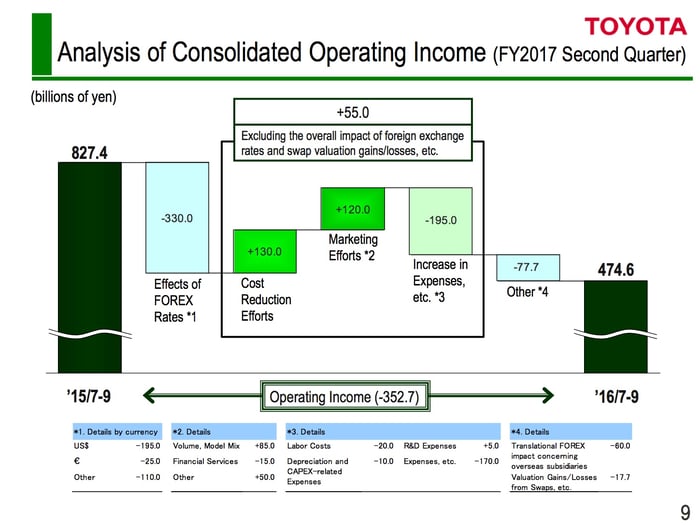 Toyota's operating income in its Japan unit fell by more than half, to 194.3 billion yen, despite a 10.3% increase in vehicles sold because of the effects of the exchange-rate swing on its exports. Its operating profit margin fell 5.4% from a strong 13% a year ago. Several Toyota models, including the Prius and most Lexus models, are built in Japan and exported to other markets including the United States.

During a press conference, the carmaker's chief financial officer, Takahiko Ijichi, explained that the problem in North America wasn't so much weak sales as a missed opportunity. Toyota has been slow to respond to a shift in buyer preferences away from sedans and toward SUVs. Toyota's Highlander and RAV4 are popular and sell well, but tight supplies have limited sales growth. That led Toyota to reduce its wholesale forecast for North America for the full fiscal year: It now expects sales in the region to be down 0.6% from a year ago.

Despite exchange-rate pressures, operating income in Toyota's Europe unit rose 14.3%, to 25.5 billion yen, on a 5.5% increase in vehicles sold. Its operating profit margin rose to 4.3% from 3.3% a year ago. The story is simple and good: The European market has strengthened, and Toyota's sales are growing.

Toyota's operating income in Asia (not including Japan) fell 33.8%, to 95.3 billion yen, despite a 17.2% increase in sales. Expenses rose, and exports to the Middle East were down.

Toyota's operating income in its "rest of the world" region fell 11.5%, to 25.5 billion yen. Margin fell to 5.1% from 5.9% a year ago. Toyota said the drop was largely explained by exchange-rate pressures.

What Toyota's CFO said about the quarter

"Despite the positive factors such as cost reduction and marketing efforts, operating income was down 466.5 billion yen compared to the first half of the last fiscal year, due to the significant impact of Yen appreciation," Ijichi said in a statement. "Nevertheless, operating income excluding the overall impact of foreign exchange rates, as well as swap valuation gains and losses was up 200 billion yen."

Toyota raised its forecasts for operating income and net income for the fiscal year that will end on March 31, 2017, while holding its expectations for revenue stable. Toyota's more optimistic forecasts assume a somewhat lower value for the yen versus the dollar and euro than the company had previously predicted. 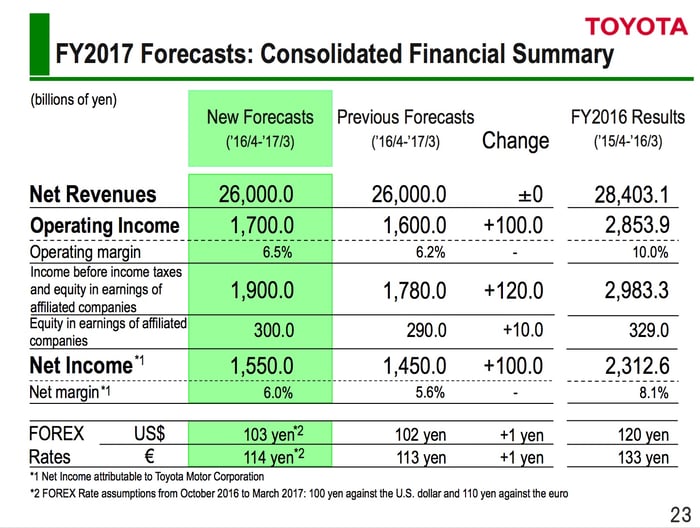