The oil and gas drilling equipment maker missed both top- and bottom-line expectations for the last quarter, something Wall Street never like to see.

Shares of National Oilwell Varco (NOV 1.72%) tumbled 12% in October. The largest impetus for the decline was the company's Oct. 27 earnings report, which wasn't exactly in line with Wall Street's expectations.

Coming into the quarter, National Oilwell Varco's CFO said that we should  expect a 10% jump in revenue from the prior one. Unfortunately for the company and its stock, that bump didn't materialize. Instead, revenue for the quarter slipped 5% sequentially to $1.65, which was below analysts' expectations. 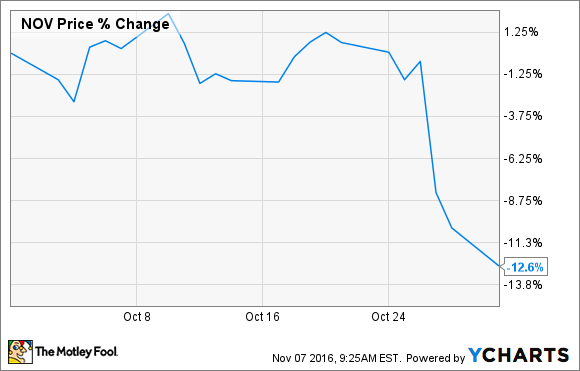 What made it worse was that the company's per share loss of $0.34 -- adjusted for one time items --  also missed expectations. In the short-term thinking of the market, that was more than enough to send a company's stock tumbling.

Disappointing earnings numbers have been a recurring theme for National Oilwell Varco over the past several quarters. Many of the company's biggest profit centers rely on the sales of big-ticket items like drilling packages for offshore rigs. But oil extraction is a cyclical business, and the industry just completed a major wave of construction, so we were likely to see some big declines in this segment. The issue is that sales in some of its shorter-term segments like rig aftermarket and wellbore technologies haven't been there to pick up the slack, because drilling activity has been so low, but that is starting to change.

It will likely be some time before National Oilwell Varco gets back to the levels of profit we saw prior to this oil price downturn, but the company has done a decent job of keeping a modest debt level and plenty of cash on hand to see it through this slow patch. Its most recent earnings flub may have some investors scared off, but the long term investment thesis for National Oilwell Varco very much remains in tact.