Shares of Keryx Biopharmaceuticals (NASDAQ:KERX), a commercial-stage company focused on renal disease, fell by 18% during the month of October, according to data from S&P Global Market Intelligence. 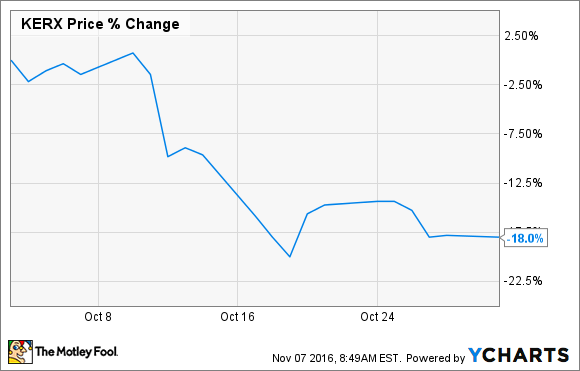 Given the huge drop, you might assume that something bad happened to the company, but that doesn't appear to be the case. The only press release to come out of Keryx in October was to announce that it would be presenting data at the upcoming American Society of Nephrology Kidney Week in November.

Given the lack of news, it is likely that Keryx simply got caught up in the general biotech sell-off. 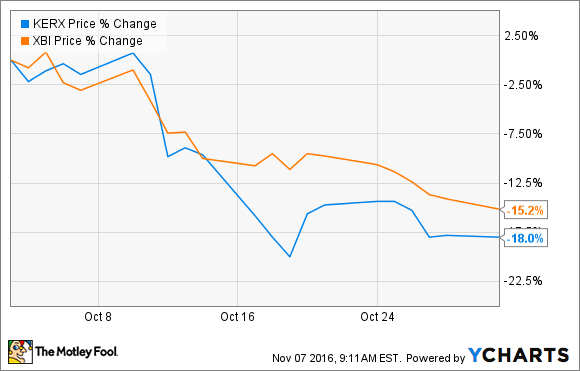 As you can see, the two roughly traded in tandem during October. In addition, it is worth remembering that shares of Keryx actually rose 28.6% in September. Against that backdrop, it is easy to understand why shares slumped.

Keryx is set to report its third-quarter results on Wednesday, Nov. 9. This will be a great chance for investors to learn how healthcare providers are responding to the company's manufacturing issues.

For what it is worth, analysts are expecting that the company's results will be rough. Current projections call roughly $5.3 million in total sales, which, if true, would represent a steep drop from the $9.3 million that was recorded in the second quarter.

Looking beyond the numbers, shareholders will want to listen in on the company's conference call to see if management still believes that the manufacturing issues will be completely resolved before year's end. Until we know more, the smart move is to remain cautious.