When your business is infrastructure construction, the election of a president who promised to spend billions on infrastructure gets investors excited. Image source: Getty Images.

Shares of infrastructure construction company MasTec, Inc. (NYSE:MTZ) finished trading up 10% on Nov. 9. So far this year, that puts the company's stock up a remarkable 84%: 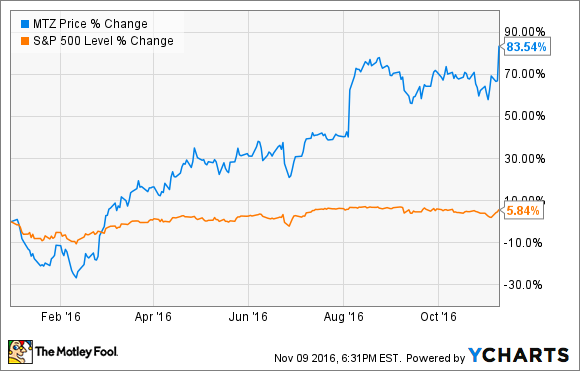 In a word, it's Trump. The election of Donald Trump as the next president of the United States has lifted a number of stocks that the market thinks will have better prospects under his administration. Trump has promised to spend tens of billions of dollars on improving and repairing America's infrastructure, and with a Republican majority in both the House of Representatives and the Senate, there's a good chance that money will get allocated toward this very thing. If that does happen, MasTec could potentially be one of the biggest beneficiaries.

MasTec also reported earnings recently, soundly beating the market's expectations on Nov. 3. One of the best-performing segments for the company, surprisingly, was its energy business, which drove a significant portion of revenue and profits even as the energy downturn continues dragging on capital spending in that industry. Indeed, MasTec seems to have turned a corner in 2016, with strong revenue and adjusted earnings growth.

However, it's probably not a good investing thesis to assume too much upside based on campaign promises. Trump will probably find it easier to fund his infrastructure plan with Congress on his side, but it's likely to take quite some time for that spending to move from the campaign platform to an enacted law. Furthermore, it's not clear at this stage how much of the investment would fall into the kinds of work that MasTec specializes in.

Bottom line: MasTec has certainly had a bounce-back 2016 and has solid momentum behind it, and there's a lot to get excited about with the prospects of ramped-up infrastructure investment. But there's a lot of work to be done before anyone can really know what this means for MasTec, so it's probably best to not really act based solely on the election of Donald Trump.